Share All sharing options for: A Closer Look At Jarrett Lee's ATVSQBPI 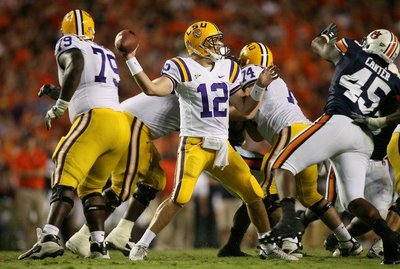 I know I promised that I would give you a look at the And The Valley Shook Quarterback Productivity Index of other quarterbacks around the country, but I had a better idea.  One of the themes of Saturday's post was that, in terms of yards per attempt, even adjusted for normal and ordinary interceptions, Jarrett Lee's rating (while bad) was not worse than the rest of the conference, and in fact was pretty much middle of the road.

Let's ignore for just a minute that these stats are wrong.  I pulled them directly from ESPN's page on Jarrett Lee, broken down game-by-game.  They've credited him with one extra touchdown pass, and I'm not going to figure out where they've added it.  Anyway, let's look at things game by game here.  Keep in mind, in the SEC last year, a rating of about 6.0 was pretty good.

Things started out very well for Jarrett Lee.  Against Appalachian State, he had 116 yards on 10 attempts, with 2 touchdowns and an interception.  Those are good numbers and that's reflected in his ATVSQBPI, which came out to a Sam Bradford-esque 12.60 yards per attempt.  In fact, the first part of the year was pretty good for Lee.  He wasn't so hot against North Texas, as he did not have a touchdown pass and did not have a high average, and it is reflected in his ATVSQBPI.  Everyone remembers his terrible interception against Auburn and his struggles throughout the first half of that game.  That narrative fits with the narrative of the rest of the season, which was of Lee throwing bad interceptions and hurting the team, but if you remember the story after that game, it was a story of redemption, as Lee's sparkling 2nd half play led us back into the game.  As PurpleReign said, the QB derby was over, and Lee had won it.  Jarrett Lee had the world in his palm for two weeks, as his play against Mississippi State the next week was also stellar.

At this point, it would have been fair to say that Jarrett Lee was one of the most productive QBs in the conference.  He had a couple of bad interceptions, but his TD/Int ratio was a healthy 2:1 in his favor, and his yards per attempt ratio was over 8.3 yards per attempt.  He was doing great.  It was about to come to a crashing halt.

The Florida game was the start of the decline, and his 2 interceptions returned for a touchdown set the tone for the rest of the season, as despite having a decent yards/attempt in Gainesville, and despite throwing 2 touchdown passes, no one remembers the touchdowns, and the interceptions outweighed them both in determining the outcome and in determining his ATVSQBPI.

Still, he wasn't done yet.  He had a not-bad game against South Carolina, at least by 2008 SEC standards, and despite his interceptions against Georgia he at least had a lot of production.  You can point to this game and Lee's very good ATVSQBPI and point to it as a weakness in the measurement.  Surely you cannot say that a game in which Lee threw a disastrous game-opening interception returned for a touchdown was a good game, but you can't have selective memory.  He also threw three touchdown passes and averaged nearly 10 yards per attempt.  His 3 interceptions are counted in the formula, and no index in the world can account for the timing of those interceptions.  If you remember the bad, you also have to remember the good, and Lee was good enough in that game that had our defense played decently we could have won.

The wheels had come off his bid to be one of the top QBs in the conference, but he was still playing, but things would get worse.  His game against Tulane was unproductive, the Alabama game was a personal disaster as his poor play was undoubtedly one of the decisive factors in the game.

He was not great against Troy, and while he shares some of the blame for how poorly that game went, the defense justifiably gets the lion's share of that criticism.

By the time the Ole Miss game rolled around, Jarrett Lee was a defeated man.  An unproductive quarter-and-a-half for Lee ended with what one is tempted to say was an almost merciful injury.

Obviously, however, the season did not end there.  The bad Tulane game was next, and then the disaster of the Bama game followed by the sour-tasting Troy game (that really was not entirely Lee's fault, mind you, but tainted everyone associated with it).  Then a terrible game against Ole Miss that ended his season clinched our memories of the 2008 season.

But memories are biased.  We tend to place a narrative to our memories and then conveniently forget the facts that don't fit the pat narrative.  That narrative is usually based on how the story ended, and Lee's story ended with several consecutive bad games and a season-ending injury.

Jarrett Lee's 2008 season has been labeled an abject failure, and his positive accomplishments have been forgotten.  If you ask people about the 2008 game against Auburn, most people will seem to remember the terrible interception Lee threw, but will forget the game-winning drive he engineered in the final minutes, or will forget the beautiful arcing touchdown pass he delivered to Chris Mitchell.  They may forget that we WON, and that Jarrett Lee's good plays won it for us.  They will remember the interceptions against Georgia, but not the yards he piled up.

It is time to rehabilitate the image of Jarrett Lee, and let him get the negative images of 2008 behind him.  There's enough positive there to warrant it, and it's grossly unfair that Jarrett Lee has become the icon of bad QB play in the SEC in 2008.  By all rights, Wesley Carroll of Mississippi State was the icon of bad quarterback play.  If you discount him, just look at the disaster at Auburn, or the entire state of Tennessee.