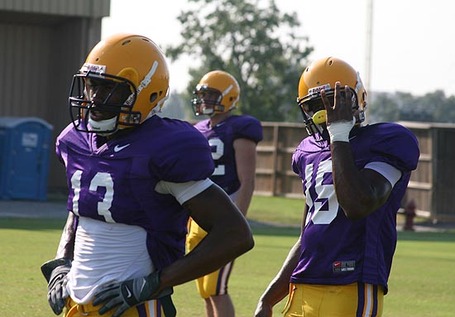 In the Spring, defensive back Ron Brooks was the story.  He moved from cornerback to strong safety, and despite his cornerback-sized frame, he was the talk of the Town, the next playmaker in the LSU secondary.  While no one said he had won the job, most people were saying he was clearly the best option at the position, and the one that the coaching staff liked the most.  He had the inside track.

Now, if you substitute the word "Fall" for "Spring", the words "Brandon Taylor" for "Ron Brooks", and change everything from past tense to present tense, you have the current story.

When Fall Camp opened, everyone was surprised to see the true sophomore backup cornerback, who recorded all of 4 tackles and 1 pass breakup in 2008, not only practicing with the safeties, but running with the first team.  At first, many believed that it was an experiment, that he was "cross-training" so he could be more versatile.  Perhaps he was in training to play more of a hybrid nickel or dime position?

In every practice report I have read that has mentioned the subject, Brandon Taylor has been listed as running with the first team at safety.  Ron Brooks was behind him, but now it seems that Karnell Hatcher is behind him, with Ron Brooks running third.

You have to keep in mind that the media sees only a small fraction of the practice, and sees no live contact.  And no, I would not put Les Miles above deliberately hiding who his starter would be.  If he really is taking that kind of approach though, we just have to live with it.

For what it's worth, Brandon Taylor is still listed at cornerback on LSU's semi-official (but probably not up-to-date) roster at Lsusports.net.

When Brandon Taylor was recruited, he was considered one of the best players in the 2008 class.  He was body-ready, a skilled athlete, and came from a football-playing family that surely put him a little ahead of other recruits mentally.  The problem was that the absolute best player in the class, Patrick Peterson, played the same position Taylor played.  It was an awkward situation where Taylor was good enough to be an immediate contributor, but the coaching staff had to wonder how much they wanted two true freshmen to be in the rotation at corner.

In the end, the defensive coaching staff probably made the worst move they could have made.  They played Brandon Taylor, but not very much, and rarely in situations that mattered.  He also played some special teams, but was not a very big factor there either.

Heading into the 2009 season, Taylor was expected to compete at cornerback, possibly as a dark horse to beat out Jai Eugene and Chris Hawkins for the spot opposite Peterson.  No one guessed he might get a look at safety and then keep the job.  It looks now like that very well could happen.

The competition is certainly not over.  I really liked Karnell Hatcher in 2008, and of the three people competing for that spot, he is the one who saw the most significant playing time last year.  He was very strong against the run, recording 13 tackles while backing up Brandon's older brother Curtis Taylor.  Ron Brooks is still, of course, an outstanding athlete who was a special teams standout last year.

Soon, practices will be closed and we will no longer get any kind of reliable information on what's going on.  We will know when we see the Tigers take the field on September 5.