ATVSQBPI: Variance From the Mean

Share All sharing options for: ATVSQBPI: Variance From the Mean 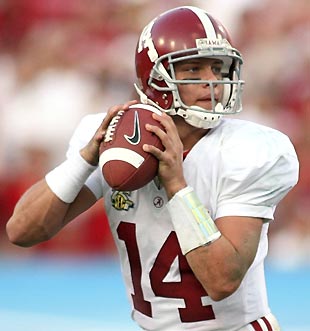 As I was thinking last night about what to write about this morning, I certainly thought about talking about the mounting injury problem at Fall Camp.  While all teams suffer minor injuries throughout the season, and these minor injuries seem to be magnified during camp, when a minor injury will usually put a player out of action when it would not have during the season, rumors are going around that some of the injuries are more serious and may put certain players out of action for part of the season.

Being the nerd that I am, though, I decided not to write about that, but delve even further into the And The Valley Shook Quarterback Productivity Index.  When we first looked at the numbers, we may have been surprised to see that Alabama quarterback John Parker Wilson's numbers were not all that much better than Jarrett Lee's, despite the very great gulf between how the two are perceived by the media and the public.  Wilson was the veteran quarterback, leading a good team to a good season, while Lee was the disaster, creating untold misery for LSU fans, and bringing down a reign of boos upon himself.

The numbers did not bear that out, but it occurred to me that maybe I wasn't looking at the right numbers.  Chris Brown over at Smart Football is one of the most insightful writers about football out there.  He writes to educate up those of who consider ourselves football geeks, or those of us who aspire to it (like me).  One of his favorite topics to discuss is "variance from the mean."  Meaning, does a player or a system hit dizzying highs and catastrophic lows, or is he steadily clicking away right at his average.  To give an example, take two running backs who both average 4.0 yards per carry.   That average can mask a lot of information.  If 80% of RB#1's rushes are between 3 and 5 yards, that is certainly meaningful.  He's steady, good for a few yards almost every time, but there are few if any big runs there.  If 70% of RB#2's rushes are stopped for 1 yard or less but he pops off a lot of 20+ yard runs, that's a totally different kind of back, and which one you want may be dependent upon the circumstances.  You certainly want to know which one you're getting before you hand out that big contract.

Having looked at Jarrett Lee's numbers game by game already, let us also look at John Parker Wilson's, to see if this "variation from the mean" idea tells us anything.

The Tigers played one fewer game, and Jarrett Lee did not play in two of LSU's games due to injury.  To me, the surprise here is that there doesn't seem to be that big of a difference there, at least to the naked eye.  Wilson had a couple of bad games in there, most notably the Utah game and the Tulane game, while he had a couple of really good games, most notably the Georgia game, when his team needed it the most.

So I suppose there is something to my hypothesis that the variation between the two quarterbacks was meaningful, and was a meaningful difference not only between the two quarterbacks, but between the two teams.  I'm not convinced this fully explains the difference in perception, however.  I think it might have had more to do with timing, however.  John Parker Wilson saved his best game for hit team's best opponent in the regular season: Georgia.  Lee played his best game against Appalachian State,w hen we probably didn't need a great game from him to win, while he was disastrous against a couple teams we might have beaten if he had done better.  And before you say, "Well, anyone could have a good game against Appalachian State, please note that steady-as-she-goes Wilson played Western Kentucky, Tulane, and Arkansas State and only saw his ATVSQBPI rise above 3.58 one time.

In addition to "timing" I think it has a lot to do with defense.  Bama had a great defense last year, while LSU's was poor.  That difference, I think, magnified the perception problems surrounding Jarrett Lee's performance.  Despite Lee's bad interceptions against Georgia, we would have won that game if we had played better defense.  We would have beaten Ole Miss and Arkansas (admittedly, Lee didn't play in that game) if we had played better defense.  Really the only game in which we played well defensively but still lost was the Bama game, which I have to admit is a loss in which Lee takes the lion's share of the blame.