A Young Defensive Line Tries to Find Its Way

Share All sharing options for: A Young Defensive Line Tries to Find Its Way 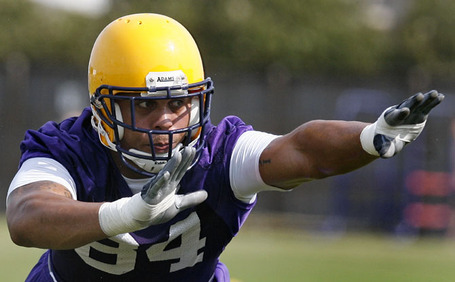 Rahim Alem is giving the opposition that weird hand shimmy that is supposed to give people bad luck.

Our starting defensive line on opening night will likely consist of two seniors (Alem and Al Woods) and two juniors (Drake Nevis and Pep Levingston), so it's strange to call them a young defensive line.  None of these guys have been full-time starters at any time in their careers, and really only Alem and Woods have played big roles in the past.

We have a good idea of what the starters, especially Rahim Alem, Al Woods, and Drake Nevis will bring us.  Alem is quick as can be and will get into the backfield.  Nevis is a force if he's healthy.  Woods has the size but is still trying to develop good technique.  We don't know how any of them will be affected by getting starters' reps, but we know what these guys are capable of bringing to any given play.  Pep is not as well-known a commodity, but we'll see him soon enough.

In addition to inexperience at the starters' positions, we have extreme youth when you get past the starters.  Charles Alexander is our third tackle behind Woods and Nevis, and he is a 6th-year senior with significant starting experience, but other than him every other member of the two-deep and even the 3-deep will be freshmen.  All five of the defensive linemen signed in the Class of 2009 are still in competition to reach that 2-deep.  The result is that when LSU starts rotating defensive linemen in and out of the game, you the viewer will be utterly lost.  We take a look at those freshmen and the redshirt freshmen and where they stand, after the jump.

Lavar Edwards, #89, DT.  When Lavar Edwards signed with LSU in 2008, he was known as a good athlete who did not go full speed every play, and his position was something of a mystery.  He could have been on the offensive line.  He could have been a tight end (quite respectable pass-catching skills), a fullback, a defensive end, or he could have bulked up to be a quick defensive tackle.  He has settled in at defensive tackle, and is looking pretty solid at this point after his redshirt year.  It is quite natural for the press to focus on the incoming freshmen and/or the new starters during Fall Camp, and to ignore redshirt freshman backups like Edwards, but everything I've heard about him has been encouraging, though he is definitely being pushed by Josh Downs and Chris Davenport.

Chancey Aghayere, #87, DE.  There are rumors that Aghayere has taken some snaps at defensive tackle, but for now he is listed as a defensive end.  Chancey Aghayere's recruiting film from his junior year of high school is about as good as any I've ever seen from a defensive end.  He was well on his way to being a 5-star headliner recruit, but injuries have slowed his development considerably.  He has the talent to be a great one, but hasn't been on the field long enough in any one stretch to fully develop.  The young man, unfortunately, seems to have just been bitten by the bad luck bug when it comes to injuries.  He missed most of his senior year of high school with an injury and then couldn't get healthy in 2008.  Here in 2009, he has continued to miss practices or be in the green jersey for substantial periods of time.

Chase Clement, #88, DE.  To this point, Clement is still known more for his bloodlines than for his performance on the field, after his true freshman year in which he redshirted behind a highly veteran corps of defensive linemen.  Clement is the nephew of former All-American offensive guard Eric Andolsek and linebacker Ruffin Rodrigue.  He's got good size for a defensive end at 6'5" and 260#.  He has been listed as the #2 defensive end behind Pep Levingston since camp started, and should see plenty of time this year.

Michael Brockers, #90, DE.  Of all the freshmen defensive linemen from the class of 2009, Michael Brockers is reportedly making the biggest push for playing time.  He already has great size at 6'6" and 285#.  Heck, he might have to move inside at that size.

Sam Montgomery, #99, DE.  Sam is probably still not ready to be an every-down sort of defensive end due to his smaller size at around 250#, but hopes to be able to contribute immediately as a pass rusher.  He is pushing to be the guy who spells (or lines up opposite) Rahim Alem in that role.

Bennie Logan, #93, DE.  I was a huge fan of Bennie Logan coming into camp, but it appears he's the one who is getting the least attention at this point.  Les Miles is well known for sandbagging and talking up one kid while really thinking another is the real deal.  I don't think Logan has done anything wrong; I just think Brockers has been a big surprise and Montgomery fits a niche that Logan can't fit into.  With 5 freshman defensive ends between the true freshmen and redshirts, it is no crime to let one of the true freshmen have a year to redshirt and get some separation

Chris Davenport, #50, DT.  Chris Davenport may have the highest upside of any player in this guide (with the possible exception of a healthy Chancey Aghayere).  He's a monster at 6'4" 323#.  He's a bit raw, and has not played against the same level of competition as even the other true freshmen have.  Still, I don't see him redshirting.  He's just too talented.

Josh Downs, #77, DT.  He's known as the "high motor" guy, and he's not even white.  His motor must be through the roof.  Downs may not have the upside of Chris Davenport, but he's a really good prospect in his own right, and has the polish to perhaps give him the early edge in playing time.

Be on the lookout for these guys, and we'll start sorting them out when the games start getting played.