Share All sharing options for: Wide Receiver at LSU Is Not the Question Mark Some Think It Is In 2009 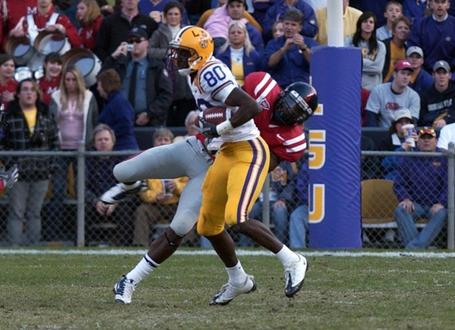 (Disclaimer: the statistics cited in this story were compiled by using box score play-by-play charts, which cite incompletions but not who interceptions are typically intended for. So the numbers may be off by a few passes, but the larger point remains.)

Wide receiver has typically been brought up by the national punditry as one of LSU's question marks for the 2009 season. It's been a steady theme for ESPN's Chris Low, who even seems to discount the position when Tim Molton was injured this summer.

While I wouldn't say it's not somewhat of a concern (the passing game in general has to prove some things), for me it's behind quarterback, line play, special teams and the transition to the new defensive coaching staff in the question mark pecking order.

Recruiting is probably the major reason for that, as the receiver position has been consistently stocked with highly-thought of prospects for the last several seasons. The former big-time recruit that many will be eying this fall is Terrance Toliver.

He was the No. 1 recruit in the class of 2007, a lofty title for a class that included Dez Bryant and Arrelious Benn - and some look at 32 career catches for 506 yards and 4 TDs as the stat line of a bust. I wouldn't particularly disagree if not for 4 things: Brandon Lafell, Early Doucet, Demetrius Byrd and Richard Dickson.

Whereas players like Benn and last year's SEC freshmen sensations, Julio Jones and A.J. Green, walked into situations that called for them to be the go-to guy right away, Toliver stepped into a situation as that featured an SEC-tested senior (Doucet) that had over 100 career catches, a third-year sophomore ready to hit the starting lineup (Lafell), a 5-star junior college transfer (Byrd) and a pass-catching tight end who had started 9 games as a true freshman and followed that up with a 32-catch sophomore effort (Dickson). Thus, in a very limited role, Toliver caught just 10 passes, though he scored three times and averaged 24 yards per catch.

The sophomore year is what some point to for criticism. With Lafell and Byrd entrenched as starters, the 6-5 Hempstead, Texas native managed to double his catch total from 2007 with 22 balls, but only scored one touchdown and averaged just 11.7 per grab.

But sometimes, a wide receiver's statistics go beyond just catches and yards.

Among the statistical revolution we're seeing in football analysis from outlets like Football Outsiders, they've developed another way to judge a receiver's production: catch rate. It's basically a batting average for receivers - the percentage of passes thrown to them that are actually caught. It can judge a receivers hands and how well they separate from coverage. The typical rate for a go-to receiver, such as Larry Fitzgerald, Calvin Johnson or Steve Smith is about 60 percent, give or take a few percentage points. Last season, LSU's top target, Lafell, had a 58 percent rate - 63 catches in 107 passes thrown. Julio Jones caught 56 percent of the passes thrown their way.

In 43 passes thrown his way in 2009, Toliver's 22 completions represent a catch rate of 51 percent. It's not the stuff that All-Americans are made of, but when you consider that LSU quarterbacks completed just 52 percent of their total passes, it's a definite show of potential. It's also significant to point out that as the rate that Toliver was targeted increased, so did his catch rate. In the first four games of the season, Toliver had one catch in four passes. In the last four (which also represented the worst stretch of QB play for LSU last season), he had 13 catches in 27 targets.

This year, he'll be stepping up to option No. 2 for Jordan Jefferson. Last year's No. 2, Byrd, had a catch rate of 56-percent. For Toliver to match that rate, he would have had to have added just two more catches to his total from 2007.

What all this goes to show, is that Toliver's production, while not what one would typically expect of a super-recruit, has hardly been disappointing when you factor it proportionally to his role in LSU's offense. When the ball has been thrown his way, he's generally caught it. With no more upperclassmen in between him and the starting lineup, and almost constant positive reports of strong offseason work, Toliver isn't nearly the question mark that has been made by the Lows and Guilbeaus of the world. Expect him to make a major impact this season.