Fans Will Be Watching LSU Defense

Share All sharing options for: Fans Will Be Watching LSU Defense 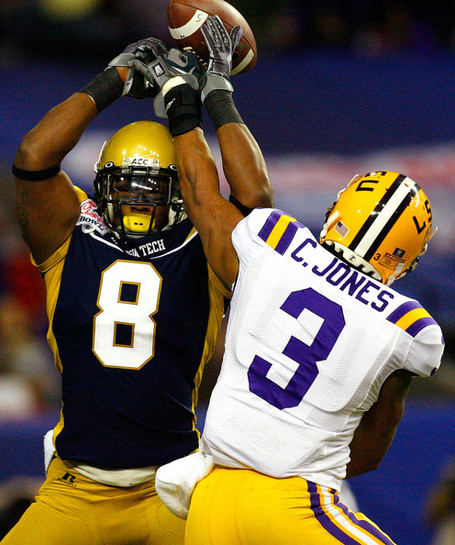 With the season fast approaching, I was trying to think of good topics to discuss to help you, the viewer, watch the right things and know what you're watching.  Yesterday, I talked about the defensive line.  Billy Gomilla helped me out and posted a nice piece on our wide receivers that actually used [gasp!] data.  I was trying to come up with the next topic in this little pseudo-series, and I was thinking about the linebackers and the defensive backs, and the special teams units, and the reserves, and it finally occurred to me that the entire defense is one giant, barely differentiated topic of conversation that has been sadly neglected.

The whole defense is changing.  Not only do we have a new defensive coordinator, but it is possible that literally none of the opening night starters from the 2008 season will be opening night starters at the same position in 2009.  All four defensive line starters are gone, as are middle linebacker Darry Beckwith and free safety Curtis Taylor.  Starting strong safety Harry Coleman is now starting strongside linebacker Harry Coleman.  Former strongside linebacker Perry Riley is now weakside linebacker Perry Riley.  Former weakside linebacker Kelvin Sheppard is battling Jacob Cutrera for the middle linebacker job and is backing up Harry Coleman at strongside.  The two starting cornerbacks against Appalachian State in 2008 are now battling each other to start on the other side of Patrick Peterson in 2009.  Former dime-back/linebacker/rover Chad Jones is now just a free safety.  No one knows who the strong safety will be.

It's massive wholesale changes in personnel and in scheme.  It's like starting over, and that's not a bad thing given the results last year, which were miserable on the defensive side of the ball.

I wish I knew what to tell you to expect.  It's all a mystery for right now.  I'll tell you what I'm looking for, but it seems so basic, like any fan could make the same list if they just sat and thought about it.

1.  The pass rush, both in a base set and in a blitz.  Last season, despite having one of the best sack artists in the conference along with a top 5 overall NFL draft pick on the defensive line, we pretty much failed to get any sort of a pass rush except when we sold out and brought in our "Express" package of 4 defensive ends, and we were still only 6th in the league in tackling the quarterback behind the line of scrimmage.  Even blitzes seemed to consistently fail to disrupt the opponent's passing game.  This was a contributing factor to a miserable pass defense.  This year, with [all together now] an entirely new defensive coaching staff, the most obvious place to look for immediate dividends is at the pass rush.  You don't have to get sacks to have an effective pass rush.  Making a quarterback throw the ball away is almost as good as a sack.  A good pass rush can contribute to an interception or a tipped pass.  A good pass rush can help you in so many ways, that it's no wonder our defense was so ineffective without one.  I'm interested to see how we do in obvious passing situations, as well as how we do in less obvious passing situations.

2.  Zone or Man?  And who are the blitzers?  John Chavis is definitely known as a zone guy, and I see no indication that he is going to change his general tendencies.  The man knows zone.  He has made his name on zone.  Like most fans, I have a hard time getting excited about zone, but you don't go out and buy a Cadillac so you take it off-roading.  Bringing in Chavis to run an aggressive man-to-man scheme unlike what he's had success with in the past would be foolish.  Let the man run zone, but mix it up a bit too.

People misconstrue a zone.  They think that playing a zone means playing passively, and that just isn't true.  In a Chavis zone, the idea is to get the ball into the air and then to go get the ball.  Chavis's defense picked off 17 passes last year and scored 4 defensive touchdowns off of interceptions.  LSU's picked off 8, and did not score.  Man defense is aggressive in the secondary before the ball is thrown.  Zone defense is aggressive after it is thrown.

Plus, playing zone does not preclude blitzing.  It merely changes how you do a blitz.  Sometimes, you pull a defensive end back into a zone and overload the opposite side with rushers.  That is, obviously, a "zone blitz" and if it works right you will have one offensive lineman not blocking anyone (essentially taking him off the field and forcing the offense to play with 10 players) while one or more rusher on the other side of the field comes free.  If that's a speedy safety or a corner, all the better.  With more speed on the field, I expect to see blitzes coming from a lot of directions.

3.  Will we punish receivers?  In a year that was frustrating in a lot of ways, one of the frustrating things that went relatively unnoticed was the fact that opposing receivers, and in particular the tight ends, could catch passes over the middle without any fear of taking a big hit.  Case in point, the first play of this highlight reel of the game against South Carolina:

I think that's something that's going to change.  The zone defense, with its aggressive-after-the-ball-is-in-the-air philosophy will make sure that receivers who go over the middle to catch passes have to pay a price for it.  The linebackers and the safeties will be looking to light up some receivers.  And if you watched Demetrius Byrd towards the end of last year, you know what getting hit hard can do to a receiver.  It can make him not want to catch passes.  Not all will actually act on that impulse, but the thought affects some receivers.  Plus, it looks cool on TV.

4.  Will players be rotated in and out as much?  More?  In 2008 and in previous years, LSU has fairly extensively rotated defensive linemen in and out of the game, but except for bringing in nickel- and dime-packages, linebackers and defensive backs remained more-or-less constant unless injury required a shift.  I wonder if that will change.  Will we see Brandon Taylor and Karnell Hatcher rotate at safety?  Will we see Ryan Baker get an opportunity to play in the base defense in meaningful snaps?

5.  Will Patrick Peterson, Perry Riley, and Chad Jones be as good as advertised?  The question pretty much says it all, there.