Share All sharing options for: Class of 2009: QB Chris Garrett 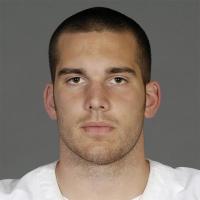 Chris Garrett of Tupelo, Mississippi, is in my opinion the most underrated prospect LSU brought to the roster this year.  Rated as a 3-star on both Scout and Rivals, Garrett is a big, mobile, strong-armed quarterback with as strong a set of physical tools as any quarterback to come to LSU in recent memory (with the noted exception of Jamarcus Russell).  Jamarcus, in fact, is probably the quarterback he most compares with.  At 6'4" and 220#, he is not quite as tall as JR, not quite as heavy as JR, and not quite as strong-armed as JR, but Russell was exceptional in all of those measurements.  Garrett is merely very good.  Garrett has the same surprising escapability that Russell had, and the arm to make the throws.  I consider him to be a solid player.

There is extensive film on Chris Garrett.  In his film, you see him make every throw.  The short screen, the fade, the deep out, the swing pass, the post, everything.  You see timing throws, touch throws, and power throws.  You see him on designed runs, and while he is not going to be a Russell Shepard with his feet, he has enough speed and athleticism to do positive things.  I said he reminded me of Jamarcus in this respect, and by that I mean that he may not be fast, but he is probably faster than you think.  Surprisingly, you even see Garrett taking a fair number of snaps from under center, which is pretty unusual these days for a serious quarterback prospect, who seem to mostly be in shotgun offenses.  Garrett takes most of the snaps from the shotgun, but he will have a leg up on getting comfortable in LSU's offense, which calls for most plays to be run from under center.

You may remember the Q&A I had with Chris Garrett's father, David Garrett, a Q&A which had a part 1 and a part 2.  David was gracious enough to answer my questions, and we also had a great conversation on the phone.  It is clear the man is very proud of his son, and of all of his children, and it's no wonder.

Chris was an early commitment to LSU, but he committed after 5-star quarterback prospect Russell Shepard, he of the astonishing YouTubes.  He is clearly not scared of a challenge, and I think his courage will be rewarded.  He is clearly a very different kind of quarterback than Russell Shepard is.  While Shepard is going to dominate with his legs, Garrett is going to get by mostly with his arm.  I suspect that Shepard will be used as a "slash" type player during his stay here in Baton Rouge, as a change-of-pace quarterback, receiver, runner, and possibly as a return man.  I am not convinced he is going to be a full-time quarterback at any point.

I may be wrong about that, but if I am right, and if Chris Garrett redshirts as expected, he will be separated from Jordan Jefferson and Jarrett Lee by two years of eligibility, setting up Chris to seriously compete for the starting spot after Jefferson's eligibility is exhausted.  If Shepard stays as a slash player, he will compete with 2010 recruit Zach Lee and whomever is recruited in the 2011 class.  With Zach Lee planning to be only a part-time quarterback, and part-time pitcher for the baseball team, you have to like Garrett's chances of one day being our starting quarterback.

Obviously there is no position in football that has a slower learning curve than the quarterback position.  Chris clearly will have a lot to learn, but he has a head start because he entered school one semester early, allowing him to participate in Spring Drills.  Still, I do not believe he will be needed in the Fall unless there is a problem at the position with injuries or attrition.  While he would like to play, I am sure, and may have played immediately at some other schools, a redshirt year will help him get more time on the field later and will give him a chance to learn the game without so much pressure.

This is one of the players that we probably won't see much for a couple years, but I think he'll have a good one when we see him.