Share All sharing options for: A Look Back at the 2007 SEC Championship Game and What It Means to Us Now 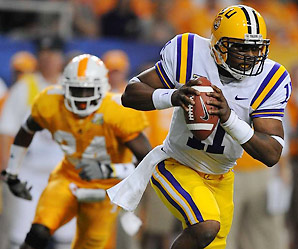 This weekend, in my boredom and in my thirst for college football of any kind, I ended up watching the 2007 SEC Championship Game again.  It always amazes me how quickly my football memory will fade.  In less than 2 years, I remembered virtually nothing about this game except for Jonathan Zenon's interception returned for a touchdown.  To illustrate how bad my memory of football glories past can be, not only did I forget that Ryan Perrilloux cut his finger late in the game, I actually forgot that Ryan Perrilloux was our starter in this game.

I was struck, in watching this game with the memories of the 2008 season still in my mind, of how much more effective our offense was in this game than it was in 2008.  We completely dominated the game.  We outgained Tennessee by 464 yards to 343.  For some reason, it did not translate to points on the board, as we only scored 13 offensive points, but our offense hummed for most of this game, even with a backup quarterback in the game.

But what really struck me is that our offensive coaching staff adjusted to having a backup QB in the game.  Until Perrilloux got comfortable, they protected him by not asking him to do anything really complicated.  He ran a lot of draws early, and some easy dump-off passes.  As he got more and more into the game, they asked him to do more and more things.  It was effective (in all but putting points on the board).  Perrilloux threw an interception that really wasn't his fault, and otherwise played very well.

What's striking about this is that we were unable to set up a safe offense for an uncomfortable QB in 2008.  One of the big complaints people had about the offense last year was that we never adjusted to Lee's struggles.  No matter how many interceptions he threw, we kept asking him to throw and throw and throw.  Why is that?  We showed we could do it in 2007.  Why didn't we do it in 2008?  I have a few possible answers to the question of why we couldn't do for Jarrett Lee in 2008 what we did for Ryan Perrilloux, and other thoughts, after the jump: