Share All sharing options for: Class of 2009: FB Dominique Allen 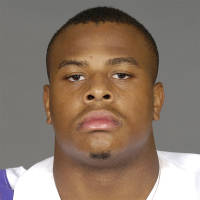 Fullback Dominique Allen of Henry County High School in Paris, Tennessee, may actually be the first member of the Class of 2009 you actually see on the field during a game.  From the moment he committed, the expectation was there that he could be our starting fullback for the 2009 season.  It's not so much that he is that great, though he is a solid player.  The issue is that with the departure of former starting fullback Quinn Johnson, the LSU roster is left devoid of blocking fullbacks.

College Football News recently took a stab at filling out our 2-deep depth chart.  At fullback, they listed Stevan Ridley and Richard Dugas.  If Ridley is a fullback, it is more in the "Jacob Hester" mold than in the "Quinn Johnson" mold, meaning he's more of a ball carrier than a lead blocker.  Richard Dugas is a converted walk-on offensive lineman.  And what's more, both are coming off of injuries, and Ridley's was particularly serious.

Can Dominique Allen be that lead blocker?  It's hard to say really.  I like his film a lot.  He is a big, strong kid at 5'11" and 250#.  His relatively short stature is actually a benefit at the fullback position, as it allows him to get low on taller linebackers.  What you look for in a blocking back are, in my opinion, strength and size (obviously), but also quickness.  It does not help to be able to put a linebacker on his back if you can't get to him before he moves out of the way.  You can't be a lumbering brute and be a fullback.  Allen is pretty nimble for a 250# guy.  I am confident that he has the athleticism to be a fullback (not that this says much really).

There is plenty of film of Dominique Allen running over people and/or dragging high school tacklers with him.  Obviously you like to see this in a fullback.  There is also film of him making a nice catch out of the backfield on a deep route.  There is also surprisingly good film of him cutting through holes, changing direction, and running for daylight with good speed.  He is not simply a straight-ahead runner, at least at the high school level.  This made him a very productive runner in high school, running for over 4,000 yards and over 80 touchdowns at Henry County High School.

While I don't really expect Allen to ever be a primary running back at LSU, this is encouraging to me because it shows that he will have the agility to go and block a man even if he has to change directions and chase him down in order to do so.

What we do not really see is a lot of film of him blocking.  There is some, which is unusual for high school film (even of a fullback), but it is not much, and he does not appear (as of his junior year at least) to really be the kind of bulldozing blocker you want to see.  With the ball in his hands, he plays with speed and power.  When he blocks, he is a bit more tentative.  There is not much film of him running over would-be tacklers as a blocker.  There is a little of that, but I wish there was more.

If he can get that part of the fullback position down cold before September 5, 2009, you could see a lot of Dominique Allen quickly.