Share All sharing options for: Class of 2009: DT Josh Downs 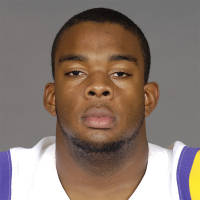 If you had asked me the day defensive tackle Josh Downs committed to LSU, way back in February of 2008, if he was a project, solid player, or headliner, I probably would have said he was a project.  He was a relatively unknown recruit with just a few seconds of available film.  He was a little undersized for a defensive tackle at 6'1" 270#.  The services had not paid much attention to him, even though he was at one of the premier high school programs in the state, Bastrop High School and was teammates with one of the most coveted recruits in the country (wide receiver Rueben Randle).  If I was feeling particularly uncharitable that day, I may have said that recruiting him was a ploy to please Rueben Randle.

How wrong I would have been!

Josh Downs quickly grew in stature, starting with an early-season game played on ESPN, ostensibly to feature Rueben Randle.  Randle was the star of the show, of course, but Josh Downs turned many a head with his performance as a killer defensive tackle who ran over, through, and around the offensive linemen on his way to the ball carrier.  Downs was a revelation.

The recruiting media also noticed.  He quickly started climbing the charts.  When the initial rankings came out before his senior year, he was a 3-star.  As his senior year progressed, he eventually moved his way up to 4-star status.  Scout ranks him as the #9 defensive tackle in his class; Rivals has him at #14.  He was probably the best defensive tackle at the Under Armour All-America Game, warranting this praise from ESPN writers:

Downs has been an interesting prospect in this recruiting cycle. He impressed us from the get-go on film, but the actual film on him was limited. His explosiveness off the ball caught our eye, and that along with his motor reminded us some of 2008 Under Armour player and current Clemson Tiger Brandon Thompson. Downs spent much of the season in the shadow of his teammate, wide receiver Rueben Randle, who is ranked seventh nationally. A debate also was waged over which side of the ball he should play on; at one point, he was graded highly at guard. More film evaluation warranted a move to defensive tackle and an invite to the Under Armour game. This week, he answered any questions. Downs is projected properly at DT. He also is deserving of plenty of spotlight in his own right. Downs was very explosive all week long, and he consistently caused problems in one-on-one and team drills. He does not have great size. Out of pads, he is very unassuming and looks more like a linebacker or fullback. In between the white lines, though, he is very productive. Downs is a good prospect who not only met our expectations but exceeded them -- LSU has another excellent defensive tackle on its hands.

A different ESPN article had this to say:

Black defensive tackle Josh Downs (Bastrop, La.) was impressive with his ability and high energy. His intensity, coupled with his great get-off and explosiveness, made him almost unblockable when shaded in one-on-one matchups. The LSU commit seems to be all of his listed 6-foot-2, 267 pounds, and showed his potential scheme versatility at the next level with his blend of speed and power. Downs has the skill set and measurables to potentially contribute at end or defensive tackle in Baton Rouge.

I would have gone even further.  I thought he was utterly dominant at defensive tackle in a game that included higher rated players.

Downs is a very solid prospect, one of the best prospects in this class.  I almost named him a headliner, but backed off.  Fellow defensive tackle Chris Davenport will be a headliner, but from my vantage point the difference between Downs and Davenport is not that great.

The lesson here, oft repeated, is not to get too worked up about initial ratings, or even initial impressions of a recruit.  Sometimes, the coaches know a lot more than the media does.