Share All sharing options for: Class of 2009: OL Chris Faulk 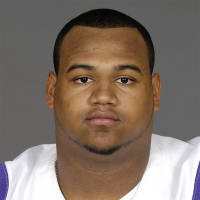 I changed my opinion of Northshore High School offensive tackle Chris Faulk of Slidell during his recruitment.  Faulk has always been highly rated by the services, earning a top 50 overall and high-4-star rating from Rivals and a 4-star rating on Scout.  After he committed to LSU, this is what I said of Faulk:

Rivals, Scout, and the LSU coaches must see something that is not at all evident on his videos.  On his videos, he looks slow, passive, and overall not that impressive.  Perhaps it is the system he plays in, which calls for him to line up in a 2-point stance (without his hand on the ground) seemingly at all times, which is very unusual for an offensive lineman.  He's got offensive tackle size at 6'6" and 280#.  Rivals lists him as the #2 Most Athletic offensive tackle, which runs counter to what his videos show.

Still, despite my reservations, word coming out of camps was that the staff was highly impressed with him and that he had the potential to really be a special player.  For what it's worth, I thought he was very good in the U.S. Army All-America Game, playing offensive guard which is not his usual position.  (The All-America games mostly use players who spent their entire high school careers at tackle, and so need to play some people out of their comfort zone at guard).

I will maintain though that his junior highlight films are not very good, or rather I should amend that to say that they are incomplete.  We see plenty pass blocking and he does fine at it, but I sure would like to see some power football in that film.  I will fully concede two points:  1) highlight film is of only limited value in any event, and 2) it may well have been the strange scheme his team ran that required him to play a funky 2-point style.  Maybe I fell into the trap Poseur described when he said, "The reputation of a line is almost exclusively tied to its ability to run block."  Truth is, in most of his available video, Chris Faulk begins the play backing up.  There is very little opportunity for the player to fire off the line and hit the defender, which is what I like to see.  If you believe Poseur's article, linked above, he will also have to be able to do that in order to find a spot on our offensive line.

His roster page lists him at 310# now, and he definitely has the size to be an offensive lineman.  I do not know if he will end up at tackle or guard.  Perhaps no one knows at this point.  I will rate him as a solid player, based in part on what I saw at the US Army All-America game and the reports of his camp performance.  I will also defer just a little to the recruiting services' opinions.  They have probably seen him more than I have.  He's a big hoss with a great reputation.  I don't expect to see him play early, as I don't expect ANYONE to play early on the offensive line.  I will be paying attention to practice reports, though.