ESPN Is Not Helping the Dedicated SEC Fan

Share All sharing options for: ESPN Is Not Helping the Dedicated SEC Fan 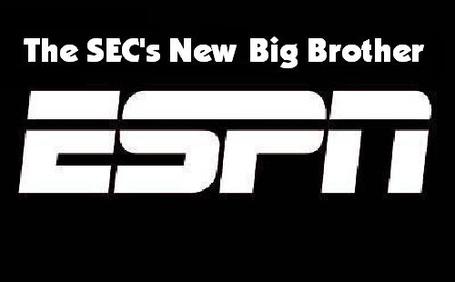 With all the furor over how the SEC (presumably at the behest of ESPN) has clamped down on all media feed that it does not control, one thing about the new deal between SEC and ESPN that was overlooked in preseason is probably the most important one.  The quality of football the average SEC fan can watch on Saturday has declined.  The new deal is to blame.

Allow me to demonstrate.  Under the old television contracts, we would normally see the premier game in the conference (or OOC game in which an SEC team is the home game) on in the afternoon, with some rare exceptions that aren't important to the analysis.  We would then see the #2 SEC game on ESPN or ESPN2 later in the evening.  Perhaps the #3 SEC game would be on ESPN2 or ESPNU at nearly the same time (say with a 6:00pm kickoff for one a 7:00pm kickoff for the other).  Failing that, the #3 game would be on the regional morning telecast, or that telecast would get the #4 game.

Now, with the SEC taking over ESPN and somehow Fox Sports Net getting involved, all of them showing games in the evening, and sometimes two games in the morning, here is what we have been getting:

Week 1 was kind of a special case because the games were so spread out and we got an overabundance of weak games due to it being week 1 (but kudos to those who did not schedule patsies), but you can see one thing here that I'm talking about.  While we got a great game in the evening, there was a pretty decent game on directly opposite it, one that I suspect most of us would have preferred to see in the morning rather than two SEC teams facing overmatched patsies.

Here you can really see it.  The SEC fan had to choose between 3 reasonably attractive in-conference games in the evening after being forced to endure a completely predictable non-conference blowout in the morning.  I am sure that Florida fans liked being able to see their team on television without having to resort to pay-per-view, but the rest of us would have liked to have gotten to see more than 1 of the games played in the evening.

Evening: ULL vs. LSU, Auburn vs. West Virginia, Georgia vs. Arkansas, Mississippi State vs. Vandy (not televised, unless on FSN which I haven't checked

Let's just skip over the argument that Tennessee vs. Florida is not the best game of the week, as that isn't the point here.  Again, we're seeing an imbalance.  Alright, Louisville vs. Kentucky is not a HORRIBLE looking game, but North Texas vs. Alabama?  And for this we have to choose between three quality games in the evening (plus our own team's game).  In years past, the ULL vs. LSU game would not have been televised, and Georgia vs. Arkansas probably would have been in the morning.  On a week like this we'd see Georgia vs. Arkansas in the morning, Tennessee vs. Florida in the afternoon, and then have to choose between Auburn vs. W. Virginia (on ESPN) and MSU vs. Vandy (on ESPN2 or ESPNU, probably with some staggering of start times on those two games).  Less overall on television, but more of an opportunity to watch the good games.

The good news is that everyone gets to see their own team more often, which is particularly good if you're a Vandy, Kentucky, or Mississippi State fan, as previously their games weren't televised all that often.  It's also good news for those of us who don't like to see decent games not be moved to the morning.  I am not one of those people, however.  I liked that I got to see reasonably good football on Saturday starting at 11:30am local time and continuing until late in the evening.

This year, at least so far, the football watching day might as well start at 2:30pm.  I have more choices of what to watch, but I can only choose to watch two decent games per day instead of getting three.  I'll get to see LSU more, but overall I'll get to see less quality football.

The upshot is that if the only thing you care about is seeing Team X play, you will have more of an opportunity to do that.  If you want to watch good football in the SEC, you have less of an opportunity, and that is a shame.  All ESPN has to do is move the #3 or the #4 game of the game to the morning rather than keeping them all to the evening while moving the #6 and/or #7 game to the morning.  I think everyone will be happier.