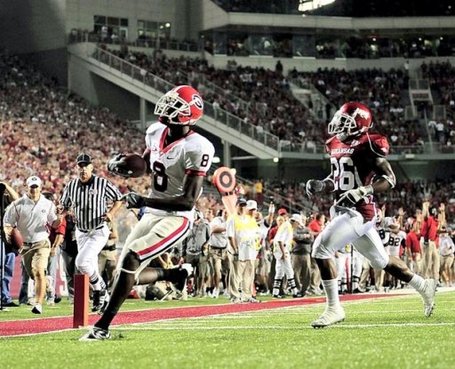 We could have gone a few different directions again this week with the And The Valley Shook SEC Offensive Speed Position Player of the Week.  Derrick Locke of Kentucky had almost 200 yards in kickoff returns, including a 100 yard touchdown, plus 142 yards from scrimmage as a rusher and receiver.  Anthony Dixon of Mississippi State had a 5.9 yard average per rush against Vandy, and rushed for 123 yards.  And Auburn keeps putting up PlayStation numbers as Chris Todd had almost 300 yards passing, plus 4 touchdowns.  Receiver Darvin Adams reeled in 3 of those touchdown passes.

But the last SEC game of the week was an offensive bonanza for two quarterbacks and a number of receivers, and Georgia quarterback Joe Cox and receiver A. J. Green ended up outdueling Arkansas quarterback Ryan Mallett and receivers Greg Childs and Jarius Wright.  Actually Mallett and his targetshad the better numbers.  He was 21 for 39 for 408 yards, 5 touchdowns, and 0 interceptions.  He struggled down the stretch though, as Georgia outscored Arkansas 17-6 from the last 5 minutes of the 3rd quarter to the end of the game.

In the end, it has to come down to the Georgia boys, and here today we start trying to correct the inherent bias for taking quarterbacks over receivers.  We're picking A. J. Green as our ATVSSECOSPPOW for Week 3.  Green, widely considered one of the very best receivers in all of college football, reeled in 7 catches for 137 yards and 2 touchdowns, including a 2nd quarter touchdown to give Georgia its first lead, and a 4th quarter touchdown that expanded Georgia's lead to 11 points and virtually sealed the game for the Bulldogs.  He also caught a 2-point conversion pass, and ESPN's play-by-play summary claims he caught every ball thrown his way.  When you consider that he caught about 40% of Joe Cox's completions, and that Cox was apparently 11 for 19 on balls not thrown to A. J. Green, I think it's obvious that Green is the right choice between the two.