Share All sharing options for: LSU-Washington: What to Watch 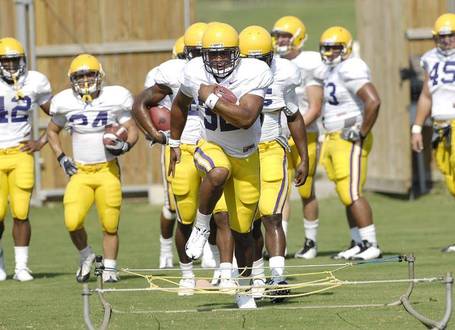 Expect to see a lot of this guy.

Here's a quick rundown of what you should and should not expect to see this Saturday. If y'all like it, I can try to make this a weekly feature.

What You Should Expect to See on Saturday:

Hope you like Vanilla Ice Cream
The Wizard will keep most of his magic tricks under wraps. Season openers against teams you're supposed to beat are for getting the basics of your offense down cold. Look for a similar game plan to what LSU started out with against Georgia Tech. I-formation running with Charles Scott, along with some play-action and roll-out throws from Jordan Jefferson.

Russell Shepard will certainly play, but don't expect to see anything too exotic. Probably a lot of option plays and simple quarterback runs. I doubt LSU will even roll anything Wildcat-ish or use him as a pass-catcher in week one, unless it's really necessary. His stat line will probably come from a handful of rushing attempts, but that's about it.

Why Did (player X) only get X touches?
This will probably get said in postgame every week, win or lose. When you have Charles Scott, Keiland Williams, Trindon Holliday, Richard Dickson, Brandon LaFell, Terrance Toliver AND tantalizing unknowns like Russell Shepard, Rueben Randle, Deangelo Peterson, Stevan Ridley and Richard Murphy, somebody has to get the short end of the touches. So get used to it, because you're going to be thinking it a lot. This doesn't mean the coaching staff is misusing talent necessarily, it just means that no matter what option gets taken, people are going to wonder if the other one would have worked better. But, and I know I'm asking a lot, but please, think this to yourself before you say it - who would you have taken the ball away from?

L and R, R and L
Richard pointed this out yesterday, but Rahim Alem and Lazarius Levingston have been swapped between the right and left defensive end spots, respectively. The change caught some by surprise, as Levingston fits the Tyson Jackson mold of the typical left end, with the size to deal with tight ends in the running game, whereas Alem is more in the mold of the typical right side speed rusher. This looks to be a case of John Chavis playing the matchups - Washington's right tackle is Drew Schaefer, a 6-4 288-pound redshirt freshmen with exactly zero college starts.

Another point to watch behind this move - Steve Sarkisian loved running play-action bootlegs early and often as the offensive coordinator at USC. Perhaps the new defensive coaching staff wants to make sure that Jake Locker is rolling right at LSU's best pass rusher.

It will be curious to see if the switch lasts beyond this game, or whether the two players swap back and forth as the game goes along.

Heartburn Return
It appears that Miles and company are going to give Trindon Holiday the chance to prove he can be the man guy at punt returner - which I have to admit is downright scary. Holiday's struggled catching anything but a kickoff for three years now, and never was that more obvious than his foray into punt-returning last year. Sure if he gets any sort of crease there's almost no chance of anybody catching him - but he struggled so badly at just getting his tiny hands under the ball that the coaches subbed in Chad Jones if the punt had to be fielded anywhere inside the 20. I was really hoping to see Ron Brooks or one of the true freshmen like Morris Claiborne or Rueben Randle get a shot here.

One of the least-talked-about issues LSU's had on special teams for two years now has been the blocking on the punt teams. Maybe having Bradley Dale Peveto absolutely nowhere near the special teams units will help that this year.

Rue(ben) the Day
With two established starters, plus a senior in the slot position, Rueben Randle probably isn't in for a Julio Jones/A.J. Green -type of freshman season. That isn't to say he won't be good, but this isn't Texas Tech. There are only so many balls to go around, and given the nature of the slot position in LSU's offense, Randle will only get on the field in four-wide sets or as a sub-in for Brandon LaFell or Terrance Toliver. I imagine there will be plenty of times where LSU will make a concerted effort to put the ball in Randle's hands, but I don't think those will come in week one.

Lockdown
In terms of his physical skill-set, Jake Locker is probably the third-best quarterback LSU will face this year behind Tim Tebow and Jevan Snead. He's got the size, speed and a strong arm - though I definitely have my questions about trying to turn him into a pro-style passer. Regardless, he's going to make a few plays on Saturday, and fans will no doubt get frustrated at times with the defense.

Now, if he comes out and completes 70-percent of his passes and throws for 300 yards, I'll definitely be worried. But if the first team defense can hold UDub under 20 points, I'll be very pleased.