If you don't remember this feature from last year, or if you're new to the site, let me just give you an overview of the And The Valley Shook SEC Offensive Speed Position Player of the Week, which was formerly called the "etc. etc. Skill Position etc. etc." We've changed Skill to Speed because offensive linemen have skill.

The award goes to that ball-handling player who is the most productive and valuable among all the players on the teams that played an opponent worth a damn. Defensive players are not included. Linemen are not included. This is because it is too darn hard for us to go through and figure out which defensive player or which lineman had the best game of the week. It's easy for us to figure it out for the guys who handle the ball. They're on the stat sheets and the highlight reels. We disqualify those players whose teams played cupcakes because that just seems fair. For that reason, this week, everyone except for players for LSU, Alabama, Georgia, Ole Miss, Auburn, and South Carolina are disqualified. There were a few worthy choices here. We could have gone with Auburn QB Chris Todd, but we didn't. We're going with Bama running back Mark Ingram.

It's hard to argue with 185 total yards from scrimmage and two touchdowns against arguably the best team an SEC team has faced this week. Ingram had 150 yards rushing and 5.8 yards per carry, plus 3 catches for 35 yards and the game-clinching touchdown in the final minutes. 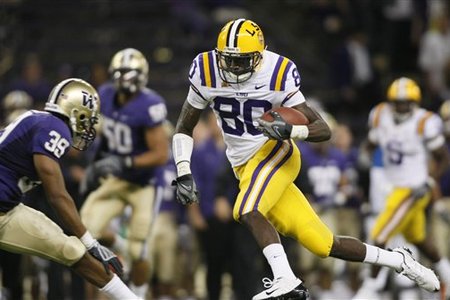 Runner Up: LSU wide receiver Terrance Toliver, who in 4 touches amassed 117 yards and two long touchdown runs. He pretty much saved LSU's bacon with a couple of nice jukes on the Washington safety Greg Walker. It was his coming-out party, and hopefully portends great things to come for this young man, of whom so much is expected.