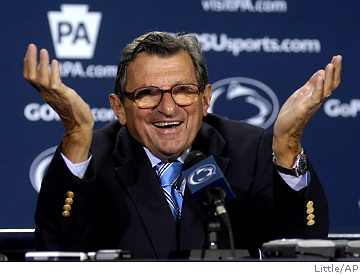 I have a lot of respect for Paterno, and while like most non-Penn State fans, I always hated Penn State, especially when they were winning a lot in my youth, I cannot help but respect their program now that I am past the rash emotional judgments of my youth. (Woo! Chad Jones!).

Anyway, while I am excited about the matchup, I don't know jack about Penn State's football team. I just know I like that we're playing them. And I really want to beat them, but I won't be devastated if we don't.

If I'm looking for anything in particular, I am looking for the offense to do something, anything, well. I don't mean a nice play or two. I mean I want our offense to be consistently successful at something. I almost don't care what it is.