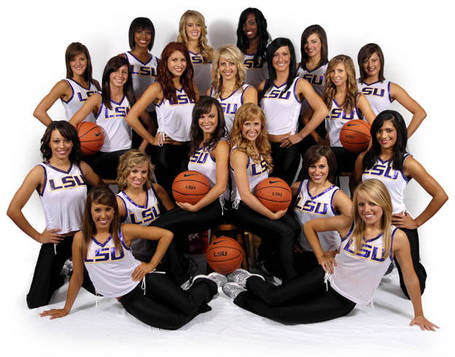 Hey! The Tiger Girls won the Hip Hop Dance National Championship at Disney World over the weekend. Seems like the perfect excuse to post their picture, right?

Meanwhile, it was another awful weekend for Basketball fans. First the Men lost badly at Florida 72-58. Taz was the only one scoring double figures with 17, mostly in the 1st half. With Auburn's surprisingly close game against Kentucky, we may be headed for the cellar this week. The Auburn game is Wednesday at 7 on SECnet syndication.

More surprising was the Ladies 80-71 loss at Ole Miss, thanks mostly to Rebel Bianca Thomas' 42 points. Ladies start a homestand against USC Thursday night. Game is at 6 and will be televised by Cox Sports.

Time to close the coaching rumors for the year. La Tech is seriously looking at Auburn's Gus Malzahn among others, but Crowton isn't among the short list of others. And the Studrawa-to-Memphis story is officially over. Memphis will hire Bowling Green's John McDonell as their OL coach. For better or worse, the '10 staff is now set.

After the break, "Highlights" from the Men's team's last 2 games.