Two straight weeks of consistent offensive production and it's hard to scoff much. From re-watching the game, I'm pleased with the way we attacked the Florida defense. We ditched (I think completely) any form of the tradition option (to the short-side or not). Florida is an undersized, speedy defense that will run that play down with ease. We relied instead on a North/South rushing attack, supplemented by a few plays at least feigning the threat of Shep on the outside. The playcalling for each QB really fit their skill set. For JJ: sprint outs, roll outs. For Lee, slants, quick hitters. Each QB moved the ball successfully. 201 yards with Lee; 184 yards with Jefferson. For the most part, the players let the game come to them rather than trying to force the issue.

I cannot say whether or not Lee would be playing as well without JJ in the game (since I have no strict evidence to base that off of), but I can say that he's maximizing his opportunities. I can also say, without a doubt, that JJ is a better QB when Lee is getting snaps. He's more effective and looks more relaxed. He doesn't press (which is something we saw from him in earlier games). I think JJ wants to be that star that lights it up every weekend, but has a hard time understanding when things don't work out for him and then ultimately tries to force them into happening rather than just playing within himself and trusting that big plays will come. Against Florida, he played confident, and he played well. Lee, of course, turned out some impressive numbers, putting TT in position to make plays after the catch with accurate throws.

This is our offense, to date. One guy wants pancakes, another guy wants a shot, a beer and to get laid. Both things are equally delicious, but failure to reach a middle ground means we get neither. Over the past two weeks it seems we have found that middle ground: First we'll get pancakes, and then we'll get laid.

Alright, so here's the plays for the week. Don't bother saying I'm discriminating one way or the other. I pick the plays based on what I thought was most interesting from the week, regardless of who is playing QB. I ended up with five total, three for JJ, two for Lee. Each play I feel like best represents their strengths and what they bring to the table. Enough with the pointless disclaimer, here's what we got. 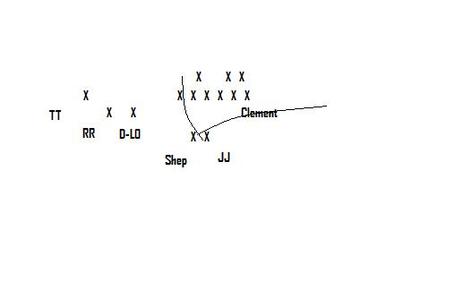 Similar to what we ran last week, but out of a different formation. Over the past two weeks, JJ has done a good job of running the zone/read, midline veer option plays, but this week he struggled. I'm not sure if it was the three man front that Florida throws at you or if even, perhaps, he was instructed to give to Shep a couple times just to keep the defense honest. Regardless, the first time we ran it, it seemed like a misread.

Again, JJ is reading the backside tackle, who was playing a two-technique for Florida. The tackle shot up the field. I believe Josh D. had an option block on this play. From PJ over, everyone zone blocked. Bark kicked out the outside man. Josh D. allowed his man to shoot up the gap and even gave him a little look out push on the way to the second level. If JJ reads it correctly and pulls it down, he had a nice lane with blockers for what probably would have been a 10-12 yard gain. Instead he gave it and Shep got stuffed for a one-yard loss.

We ran it again later and it was a similar outcome. We ran it successfully a couple times, with JJ keeping, but for the most part, Florida did a bang up job of shutting down this aspect of the run game. 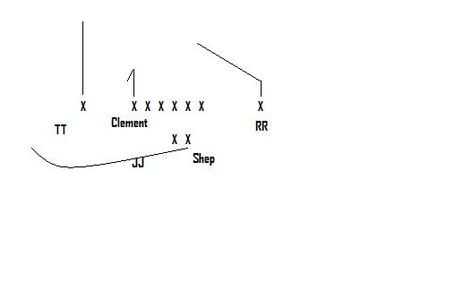 Oops, forgot to include the other WR to the far right side of this formation. I couldn't see his route on screen, anyways. This is the first play I can remember seeing something that both QBs ended up doing all night long: throwing behind the blitz. Like I said in the review, GC, Miles or Billy obviously saw something.

On this play, to the left of the formation, a blitzing linebacker lined up outside Clement. Additionally, Florida walked up a safety to cover the zone this blitzer would "vacate." This play counteracted that by sending Shep out into the flats on a swing pass. The safety sucked down on that swing route with the blitzing LBer coming after JJ. Clement ran a simple dig route and just settled. Easy pitch and catch right behind the blitz into the vacated area of the zone that turned into a 21-yard gain. Great design and great execution. I would say about 80% of our passing yards came on plays behind the blitz. 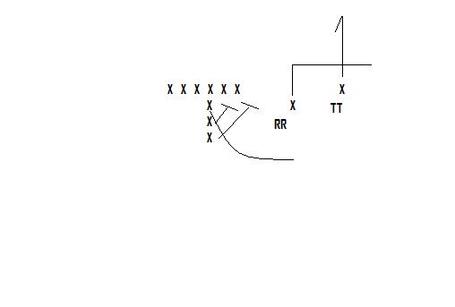 This really is rudimentary football here. Plays like this should make it fairly evident that JJ is struggling making it through his progressions. (not that anyone really questioned that). But that's okay, he gives you the mobile dynamic and a play like this allows him to utilize his strengths.

JJ runs a simple sprint out while Stampley and Ridley seal the edge in pass blocking. Randle runs a short out and TT runs a 10 yard comeback. JJ rolls and tosses to TT just as he is cutting back in. Simple timing and execution. Nothing ground breaking about this play, but it is an instance of Gary tailoring plays to the strength of the QB. We ran it again on the very next play, to the other side of the field but the timing was a little off and JJ threw it a bit high. 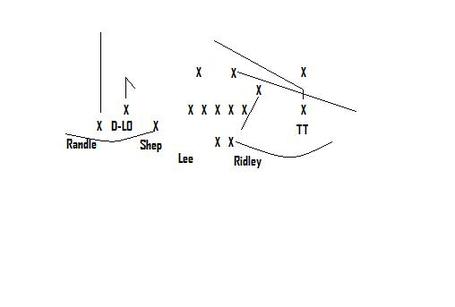 This play was our money maker. We ran it twice, with two completions for 66 yards and a TD. Guess this one is a keeper. My diagram is probably confusing, so I'll do my best to explain. I should have used multiple colors (hey, I'm learning on the fly, okay?).

The routes on the left are what they are, so let's focus on what's happening on the right. TT lines up alone, thus earning him man coverage against a much smaller corner. He runs a pretty simple slant route. Ridley runs a swing pass. Remember what I said about throwing behind the blitz? Oh yeah, it's back. Once again, Florida brings that outside guy for pressure. This time, the MLB, who should be in the passing lane of the slant, is forced to come over and pick up Ridley in the flats. This opens the passing lane, Lee throws it behind the blitz and hits TT in stride between three defenders who are all equally out of position. TT does the rest of the work. It's really beautiful design and we ran both for TT's 38 yard TD and his big completion late in the game to get us to the two. 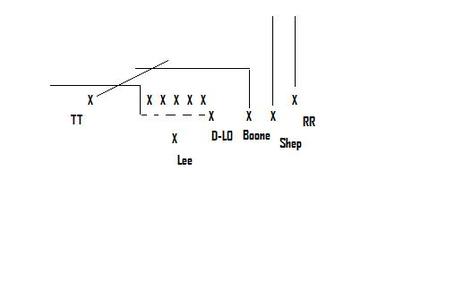 Once again we come out in the trips formation. I think a lot of this had to do with spreading out the Florida defense to find passing lanes in the middle. Pre-snap, we bring D-LO across the formation in motion. I'm not entirely sure this play isn't designed to get him the ball. He runs a simple out route behind TT who is running a slant. Shep and RR run go routes on the outside right and Boone is running an in (that he ran sloppily, by the way).

Lee makes a beautiful low and outside throw to D-LO, who is able to turn it up field and gain six or seven. It was a nice play and it picked up a first down. My only major beef is that on the play TT becomes completely free after his route with Boone crosses. If Lee hits TT in stride, he may have taken it to the house with the open field in front of him.

-Overall, the game was well called and well executed. Both QBs had one three and out. JJ had a drive end after a sure first down was called back due to an unnecessary holding penalty on third down from Clement. He was sacked the next play. We still need to eliminate garbage plays like that. I know, holding happens, etc. And Clement was making a good, aggressive block, but if he gets his hands inside there, it's a 10-yard gain for Ridley and a further sustained drive.

-Most of Lee's work consisted of short passes, thus the reason for his high completion percentage. I'm not dismissing the performance, by any means. His throws on the slants to TT were perfect and allowed TT to make plays. He did what he needed to do: made the high percentage throws and then took advantage of the defense when the play was there.

-Spencer Ware continues to grow into a bigger role in this offense. Don't be surprised to see more and more of him. He's got a sticky set of hands and has shown good blocking ability.