Well, that happened. This won't be a fun one to write. How could it be? Winning is fun. Losing is not. Getting dominated is even worse. Yeah, I said it. We got dominated. This street goes both ways. For the past seven weeks, two close games notwithstanding, I've watched us whip every opponent. We've dominated up front, we've been in control. Even in the games that needed last minute drives to win, we possessed a decided advantage in yards, and were a couple unfortunate turnovers away from being up double digits in those games. But on this Saturday... the roles were reversed. Auburn kicked our ass all over the field Saturday night.

Cam Newton is a special player. I admit, I believed he wouldn't be a fit for Malzahn. I was wrong. No one has cut up our defense like that since Darren McFadden. There's so many painful facets to this game, that it's hard to mention. I don't know what's worse, the fact that we yielded over 500 yards or the fact that we yielded over 400 of them on the ground. Run defense was formerly our hallmark (I'm talking about for the last decade), not this game. There's a lot to discuss this week. There will be plenty hand wringing and head smashing into the wall, but I'll try to put together a few thoughts after the jump. Also after the jump: Cam Newton is still slicing through the LSU defense.

I'll get into gameplans after I watch for a second and third time, but a couple short notes in that regard. 1) I didn't feel Chavis had a bad plan. There were numerous times when I'd see guys right there in position and then one of two things would happen a) Nobody would tackle (90%) or b) Newton would improvise and make a special play. Again, this is without re-watching the game, so I may go back re-watch and feel 100% differently. But as Billy and I have said all week, if we don't tackle, we don't win. We didn't tackle.

Offensively... different story. Throughout the first couple of drives, I thought Gary had actually engineered a hell of a plan. And then, it all came crashing down. Realistically, we were shot in the foot at the end of drives. We have two extremely limited QBs and unfortunately, we hamstrung ourselves by not playing to their strengths. JJ drives us down to the 37 using a nice combination of runs and rollout passes. These are the type of plays he runs well. And then... we decide to stick him in the pocket to try and convert. The results were two horrendous throws, one of which was picked off. 0 points. Why?

JJ made his hay Saturday with his feet. For all the talk of people saying, "JJ isn't a runner and we're trying to make him that!"... You're wrong. He is a runner. He may not be a gazelle like Cam Newton, and he may not be elusive like a Taylor Martinez, but he possesses very strong running ability. If not for his running ability on Saturday, LSU probably only scores three points.

Which brings me to Jarrett Lee. I'm not going to sit here and put the kid on blast. It wasn't fair when some of our "fans" did it to JJ, so it's not fair to do it to Lee. That being said, all those who trumpeted Lee and how worthless JJ is now need to take a step back and realize that maybe our coach wasn't such an idiot at all. He watches these two EVERY DAY. He realizes how severely limited both of them are. I've seen numerous people blaming the wrist injury. Lee looked fine. His ball wasn't any different. Will he be sore today? Sure. But he was well enough to play, so no need to excuse his poor performance. He was off all day. His throws were inaccurate (yes, so were JJ's, but JJ gives us some ground game). We didn't cross the 50 with Lee once.

What strikes me is the irony of the "fans" who said last week that JJ couldn't drive us down the field and couldn't get us in the end zone. The roles were reversed Saturday. Moral of that story: Don't get too brave until you have a known quantity. Lee looked great in spurts for two weeks. But he's played poorly each of the last two weeks. But there's still a bigger thing behind this other than Lee... other than JJ... 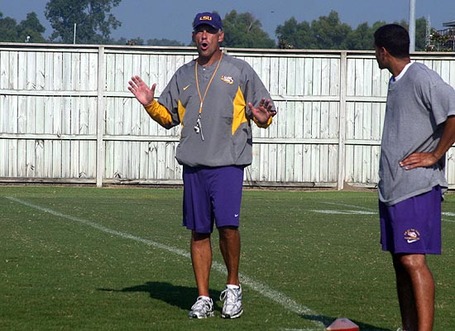 Oh, I think you all probably recognize this randy individual. Only through the magical voo doo of college football could he still be employed and in such a prestigious position. I don't know if I buy the whole "Crowton starts good but gets worse every year argument." I don't know if it's truly a personnel thing (maybe we missed on two QBs in recruiting). I don't know what the issue is. But I do know that our offense has performed miserably over the past two seasons and a half, and we still sport some of the best talent around. I do maintain the opinion that RP leaving cost this team dearly, and other attrition lead to many of our struggles (particularly in 2008 and 2009). But we should be coming out of that now, and our mature, experienced QBs shouldn't be enduring this now. It's time for Gary to go, and I think everyone knows it. I'm of the opinion that Crowton wouldn't be back next season even if we averaged 500 yards, 60 points and went undefeated. The bridges were burned last year, and I have a feeling behind the scenes issues kept the move from being made.

Back to the game, defensively, we were a hot mess. I think Mo Claiborne was the only guy who knew how to tackle Cam Newton. He went after his feet twice, and got him down, all 177 pounds of himself, by himself, twice. Where was this all day? Kelvin Sheppard was basically non-existent. If you've read any of my post game reviews, you know my feelings on Kelvin. I like the guy, and I think he does a good job of getting our guys lined up, but he's not a great linebacker. If you put a blocker on Kelvin, you'll end his day. Tennessee, Florida and Auburn all blocked right at him, and Sheppard failed to be a playmaking force in any of those games. Drake Nevis was outplayed by Nick Fairley. Really, the defense seemed outmatched all day long. K

udos to Malzahn and Chizik and the Auburn staff for having their guys ready to play. They outcoached and outplayed us. I'm not a huge Gene Chizik fan. I think he's a dynamo recruiter who is a bit of a rah-rah coach (but I suppose the same could be said about Les Miles). But Saturday, he and his staff outdid us.

Going forward, just take a deep breath. It's one loss. We're still right in the hunt. The media will use these next two weeks to talk about how the luck all came crashing down blah blah blah. I don't see it that way. By hook or by crook we were still in this game in the 4th quarter. Hell, it was tied midway into the 4th. But Auburn closed us out. Start praying for Auburn losses, and pray that we establish an offense in the bye week. There's a great chance this team wins 10 games. I think pre-season the majority said 10 wins would be a great season. I can't be terribly dissatisfied.