Bye Week Discussion: Who Will Be The Next Retired Number in Death Valley?

Share All sharing options for: Bye Week Discussion: Who Will Be The Next Retired Number in Death Valley?

Bye weeks are the perfect time for idle chat, such as who's the next Tiger great to get their name in lights?

To have a jersey retired at LSU, an athlete must have completed intercollegiate competition for LSU a minimum of five years prior to nomination.  Athletes must have demonstrated truly unusual and outstanding accomplishments, exceeding and in addition to all criteria used for Hall of Fame selection.  The athletic performance must be considered unique, such as winning of a Heisman Trophy or National Player of the Year award, and should be based on the total LSU career. Athletes may also be considered for making dramatic impact on the popularity of his or her sport or for significant participation in positive change in LSU Athletics.   Nominees must have a unanimous vote of support from the Hall of Fame committee.

It goes without saying that being in the LSU Hall of Fame is a prerequisite. Here are the current members for football.

So who's next? There is nothing that says LSU will retire a jersey this year, and so far there isnt really a pattern as to the announcements. Cannon's was announced just weeks before, with him reportedly not even being aware it was happening until they pulled the banner back, while Casanova's was announced the preceding May. 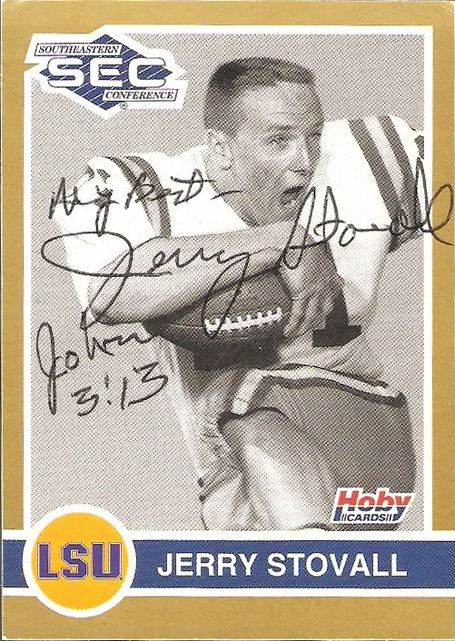 Jerry Stovall's recent induction into the College Football Hall of Fame certainly makes him the odds on favorite (in fact, I've heard LSU is doing something to commemorate the occasion at the Bama game next week) but that list is a long one. Who do you think is worthy of being up there with the greats? Over the weekend, I'll collect some of your suggestions and we'll do a poll.