Thoughts from the South Endzone: LSU - UT; Life In An Untimed Down

Share All sharing options for: Thoughts from the South Endzone: LSU - UT; Life In An Untimed Down 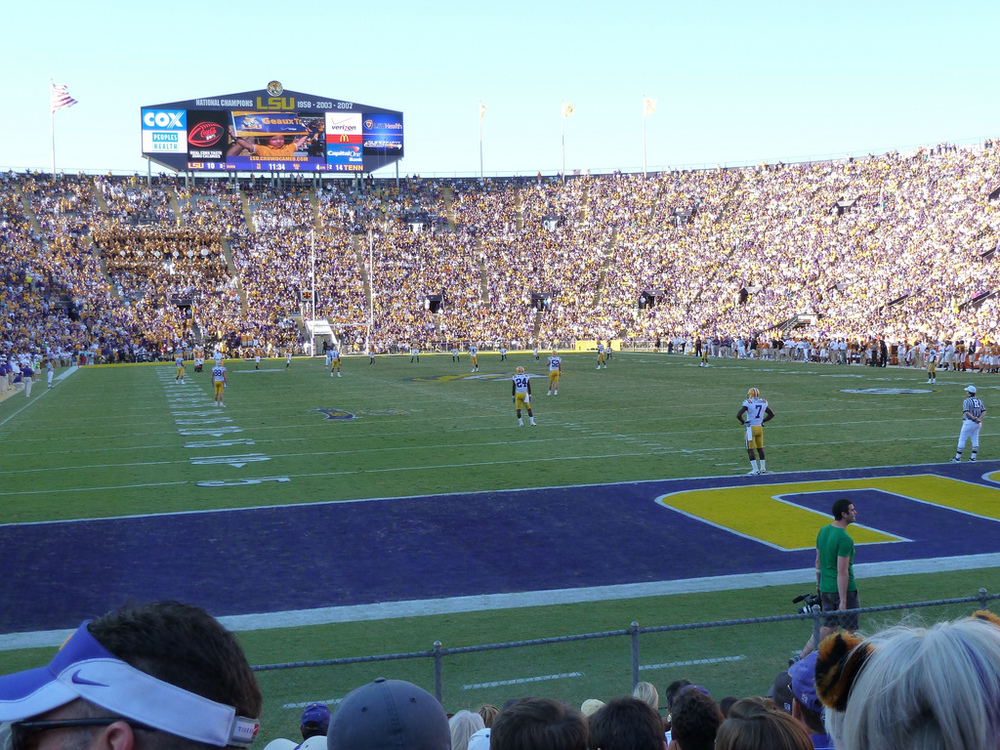 Back on track in the beautiful weather, all pics and vids in this post were taken by me and can be used for anything you want. See the full set here.

I checked off "successfully survived an attempted roit/bloody coup" from my bucket list this weekend. But more on that later.

The weather in Louisiana has been as perfect as it gets the last week and Saturday was no exception. It was a fine tailgating atmosphere that made me curse CBS for shortening it for a day game. Vol fans traveled very well and I saw many large scale UT tailgates around campus. 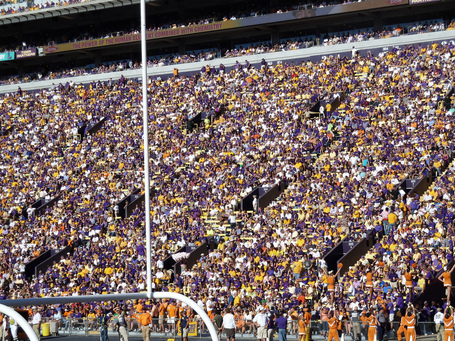 With all due respect to Dan Borne', there's no way this was the 5th largest crowd in Tiger Stadium history. Gaps of empties were prevalent in all sections except the students. From my vantage point the worst was clearly the east bleachers, where open seat groups spanning multiple rows were all over the place from kickoff on. It only got worse as some folks decided to leave at halftime (click here to see the above, taken early in the 3rd, in full size). Can hardly blame them, though, as Mike didn't even bother to show up for this one. 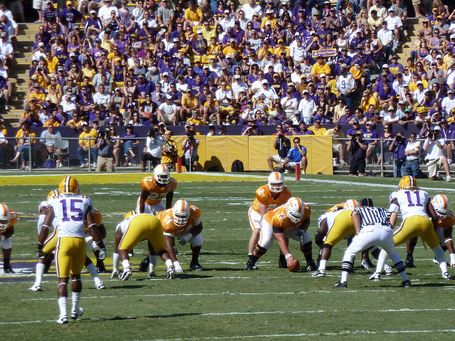 I'd like to say Jefferson earned some respect back with that 1st play touchdown, but after the cheering stopped most of the crowd seemed to say "That's great, but lets see you put a drive together" The booing came back with the first INT. (It should be mentioned that JJ was also booed during the starting line-up announcement. Not loudly, but it was definitely there). 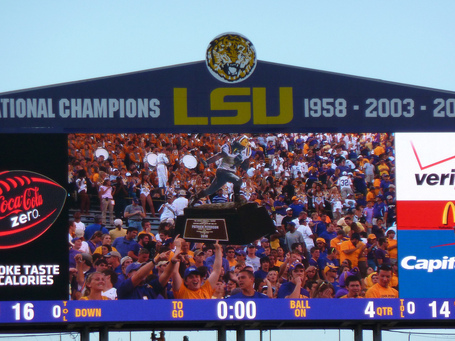 I hate to admit it, but the the way Heisman campaigns go, Patrick Peterson's probably ended before it even really began. Yes, he was still Zod on D, but UT stayed true to Dooley's word about punting to him and he only had 2-3 good returns. At this rate, he's going to have to get some Pick Sixes to get back in the spotlight, but I'm not sure If he's going to have enough chances.

Loudest noise of the day (before the end) was easily the late 4th-down stop by the D. I live for moments like that in Death Valley. Getting goosebumps just remembering it.

With the exception of the halftime exits, the crowd really hung in there for the whole game. Well, right up until the mass exodus after J Lee's endzone pick. I'd say a good 10K decided they'd had enough and all left together. 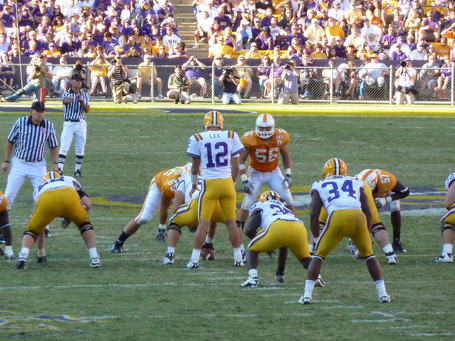 Now for the fun/scary bit. That last drive could be the season in a nutshell. Lee should be commended for that 4th down pass, and the stadium erupted like we had won the game. As we kept driving and the time started slipping away, the crowd became a constant dull roar, and came unglued as we approached the end zone. The last two timed plays unfolded and the crowd became loudly hostile. People flat out lost their minds as the attempted substitutions occurred, and the second the ball flew out of Jefferson's hands, a hail of cups, flasks, nerf footballs, and anything else that wasn't nailed down came from the west bleachers onto the LSU sidelines. And I do mean nailed down as I saw more than one enraged fan attempt to pry one of those new soft seat backs off the seat and hurl it to the field. (pro-tip to the grounds crew, I'd make sure those stay secure for the rest of the season). I also saw more than one person attempt to make their way to the field. They didn't get far, but that looked like a very ugly situation was about to happen. Thankfully, a half-second later the ref made the call about the flag and it got even louder. Regardless of how the rest of the game went and how the season ends, Ridley's run was one of the greatest moments I have ever seen in person. For 5 minutes, nobody cared about or could even explain what they just saw. We were all just so glad it happened.

On the way back to the tailgate (which lasted well into the night, as it seemed most had decided to stick around, cook some dinner, and watch UF Bama rather than deal with traffic) however, the reality hit hard. We nearly lost to a very down UT squad who we should have run out the building. We have 2008's offense back, stupid turnovers and all. We have 09's clock management issues. The new wrinkle of personnel management issues is sure to bring new and exciting levels of frustration over the next few weeks. I have no idea what to think about the rest of the season except that it will all be like this. We will get frustrated and stupid things will happen. Every game will either be in doubt much longer than it should or be a down to the wire finish. This game will by no means be the worst of it. It is going to get crazier from here on out. This team lives on the very edge of sanity tilting wildly from triumph to disaster in a matter of seconds. We are equally capable of 7-5 or a Sugar Bowl appearance. I just hope my heart can take it. 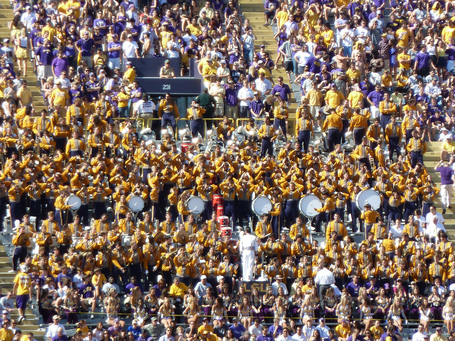 Things seemed a lot better this week, maybe all those timing problems were just in my hazy head. I wont knock the band for playing the Monday Night Football theme, it sounded great. And as much as I wanted to hang my hat in shame at the playing of Poker Face, it sounded better than I feared it would. And I always love it when they march to an endzone to finish the set. My complaints about unacceptable levels of piped in music remain. This aint an NBA game, so there is NO excuse for it.

The day started very oddly as UT's band marched in a x2 column in full gear all the way to the student union around 9am, and then hilariously marched back downstairs when they noticed none of the shops were open due to construction. A very strange sight. Other than that, the same complaints about UT's band that we all have. If I hear Rocky Top one more time I am going to kill someone. They brought a full compliment and I fear did a better show (a 3-part west side story number.) A safe piece, to be sure, but executed well. The block T to the UT fan section was a nice touch. And we all had a good laugh as the trampled over a half-dozen dropped music flip folders. It's always a good reminder of why marching bands should memorize the music instead.