Remember this one while you can, as I'm hearing strong rumors that Neck is the latest casualty of the slap fight between the administrators and the student section. (Any band folks wanna chime in on this? I know you're out there)

Lots of news yesterday that you should know about. John Brantley, despite the Vegas rumors of injury, is starting for UF. Jefferson will be starting for LSU though we will see the same sort of substitution frequency as last week. Also from Wednesday's briefing: Moving Crowton down to the field has been discussed, but it wont happen this week; DE Ken Adams will start and DE Lavar Edwards will take Sam Montgomery's place on the other end. You can see this press conference after the break.

Well, we knew it was coming. The hand-wringing about just how terrible Miles is has been pouring in from all quarters. From Jaques Doucet's rant at the Monday briefing, to ESPN, to Oklahoma.

And of course the fans have also expressed their displeasure and accomplished the near-impossible task of earning both Schadenfreude awards on a winning week.

I would also like to highlight the works of one Spencer Hall, an upstanding Florida man who's mustache could use a little work, as it seems the thought of seeing Miles on the opposite sideline this weekend in one of his "lucky" years has obviously driven him from flabbergasted to abject terror and insanity.

The players, on the other hand, are fully behind their coach. Frankly with all the BS they've had to deal with over the past week, that's great to hear.

In the polls that matter (GO TEAM SBNATION GO!), The broken BlogPoll puts us at 11, and the SEC Power Poll dropped us to 6th and somebody even gave us a last place vote.

Radio show last night was mostly positive, but it always is. Mike Shingleton from WBRZ was there and caught a pretty great quote from the Evil Twin. Video after the break. (BTW I guess helmet hair runs in the family? Mike's resemblance to Pat is down right creepy...)

Things seem to be getting a little tense around here. So lets all just take a step back and laugh at the Land Shark.

ATVS BASEBALL MEME UPDATE: The Commies have a new Premier and finalized the politburo for the season.

While we are on the sport, slight panic in Hoover as the Baron's contract for Regions Park expires at the end of the year, and it may take the SEC tourney with it.

In Basketball news, The ladies started practice this week. And the Men's coaching staff fell to the Maravich Maniacs in the 1st annual preseason dodgeball tournament. Trent Johnson didnt fail to get his licks in though... 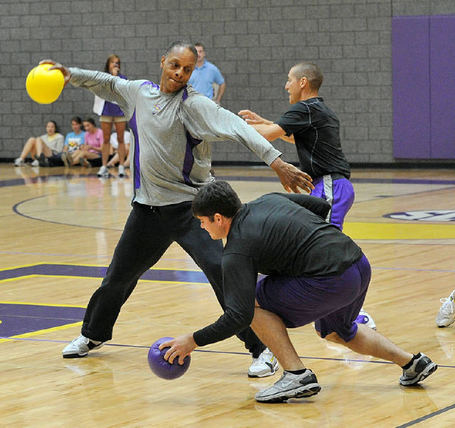 Pretty sure I just saw @LSUCoachJohnson hunt down the kid that took him out & drill him from point blank range. #CoachJhashisownrules

Pic and quote from the feed of LSU Asst. AD Craig Pintens who also lets us know that Whiplash the Cowboy Monkey is on the list for this year's halftime entertainment. I continue to hold out hope for the return of Quick Change.

After the break, Zod addresses his empire, why the Alumni Association isn't making a UF trip this year, and Wednesday's press conference.