Raise your hand if you're a fan of Gary Crowton as offensive coordinator. Yes you, in the back... I see you... yes, you still support Crowton? "Who me? Oh... I was just stretching." Yeah, that's about what I thought. Everyone wants Crowton gone, and for good reason. Though I don't believe the failure of LSU's offense over the past two season doesn't lie entirely at his feet, I also don't feel he's done the best job of manipulating what he has into the best possible outcome. He's the master of the square peg in the round hole.

I know one thing is for sure. I shouldn't feel like the guy making the phone call in the above clip every time I watch the LSU offense. Why is Gary just dancing around singing "Buffalo Soldier? Why am I drinking Colt .45? Why am I at a party and calling my friend asking about Josie and the Pussycats? Why, dammit, why?

So really, the what and why of our offense is puzzling. To be frank, with JJ playing QB, we are a limited offense. There a throws that could really increase our offensive potential that he simply cannot make. It's a sad, unfortunate, reality. To be frank, again, with Lee playing QB, we are a limited offense. Whatever throws he can make, he tends to follow with an act of absolute buffoonery that would make even Larry, Curly and Mo blush. I don't say either of these things to be harsh; they are just sad realities at this time and place.

Yet, for all the weeping and gnashing of teeth, I must say that Gary didn't call a horrible game. *pauses.* *looks around.* *grabs balls to make sure they are intact.* *sighs in relief that he still exists.*

You know that whole, cram it down their throats thing that we've been begging for recently? Well, we saw it this game. Hell, the only reason we even passed more than we did is because we unfortunately fell behind late. Hell, tied 7-7 in with 2:49 to go in the 3rd, we ran the ball six consecutive plays, five of which were zone read plays. The only pass on the drive was an incomplete by Lee on 3rd and nine. The staff actually seemed content with grinding it out through the ground game rather than trying to force the pass. There is light at the end of the tunnel!

Now, for the plays themselves... there were some good (zone/read option) and some dreadful (PA fade/wheel to Ridley from the nine). Here's a look at a few I found most interesting. 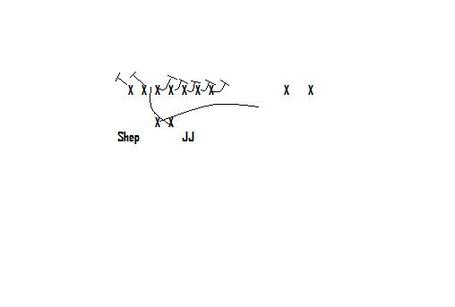 As far as I can remember, this is the first time we've run the big set outside of the red zone. A couple weeks ago, this was our go to formation inside the 20. This week, we ran it frequently and without regard to down, distance or field location. I must say, I'm a fan. We run the ball extremely well out of this set (as well we should).

If you haven't figured it out, this is the first play of the game. I've seen more than one person describe it as "luck." I think that's weak. The design of this play is brilliant (sometimes, it's hard not to love Gary). Tennessee has probably seen us run Shep on a sweep enough to know it's a concern. We use him as a tailback in the formation and run a very simple zone/read option play. Except, Gary tweaks the blocking scheme ever so slightly. Instead of the entire line zone blocking right, both Barksdale and Peterson kick out their men left (both do so outstandingly, I might add). Thus, instead of JJ's read being the backside end, he's actually reading the tackle just inside of him. That tackle crashes down (as his read prescribes), JJ keeps and shoots past him (tackle is too slow to adjust). This puts JJ in the open field facing one tackler. Why does JJ have only one man to beat? Well, the linebackers completely flow to the defensive left due to the blocking and to honor Shep. The safeties are already up tight to account for the run. The lone tackler is safety Prentiss Waggner. JJ makes a subtle move and shoots by him. 83 yards later we are on the board. Great design. Great execution. Great offense. This isn't "pure luck." 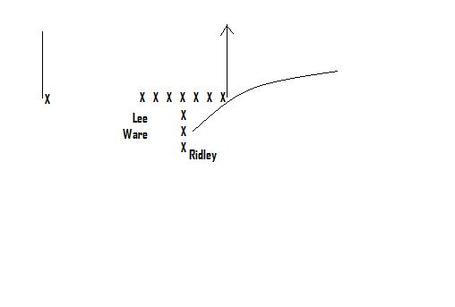 This was Lee's first play of the game. Once again, we are in the BIG set, with two tightends in the game. Ware stands in at FB for the play, with Ridley dotting the I. TT is split wide to the left. Lee play actions to Ridley as Ware goes into the flats. Ridley makes an outstanding cut block to level an oncoming blitzer. Ware finds open ground in the flats, Lee throws a nice touch pass just over his shoulder that he's able to catch in stride and carry up the sidelines for a 16-yard gain. Simple play, with basically no reads. It was a designed throw to Ware.

Why does it work? Tennessee is aligned in a 4-4 defense, attempting to match our power running look. Well, through a bit of fortune, the blitzing outside linebacker takes himself out of the play. Peterson running up the seam occupies the deep safety, keeping him from sucking down on the play. The other two members of the secondary are on the opposite side of the field. The left inside linebacker is a step behind Ware getting into the flats and not as quick as him, allowing him to be wide open on the play in wide open space. Good design, good call, good execution. 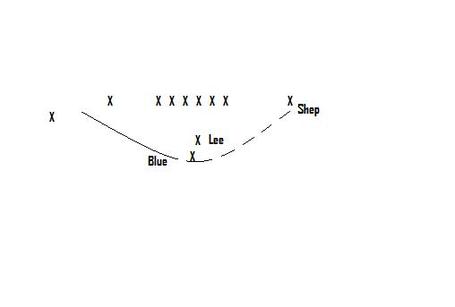 This is Lee's second play in the game. We ran this out of our modified "Pistol" formation, which we've begun to run with regularity. Blue is lined up close behind Lee, but slightly off center. Shep comes in motion across the formation behind both Lee and Blue. As he continues to the left of the formation, Lee calls for the ball, and play actions to Blue. Lee then makes an easy swing pass to Shep who takes the pass an easy five yards.

When I mentioned above that there are certain plays JJ can't execute, this is what I meant. His elongated release and lack of touch make throws like this nearly impossible. These are the kind of throws we MUST rely on with Lee in the game. Short, sweet and easy. Get it to the stud and let the stud do work. 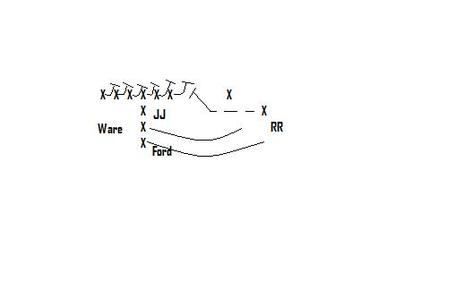 We ran this motion play with RR a lot, out of multiple different formations. Typically it was used to get him in motion as a run blocker, but he went out on a route out of it at least once. I highlight this play only because it's the first time I can remember us running it all year. And we ran it twice. This is classic Xs and Os here, the good ole toss sweep.

Randle comes in motion and seals the edge, the line is zone blocking to the right. TT stalk blocks up the field. The play stretches wide while Ford looks for a hole and then cuts it up. Well executed here by Ford. Later we ran it with Murphy, who fumbled the pitch and killed a drive. Not well executed by Murphy. Also, god love Ridley, but he's just not the type of back to make these runs. We need that outside compliment, and I think Ford may be it. Ford has the gear Ridley lacks. If the blocking were better on this play, it could have been six points. Instead, it was six yards. 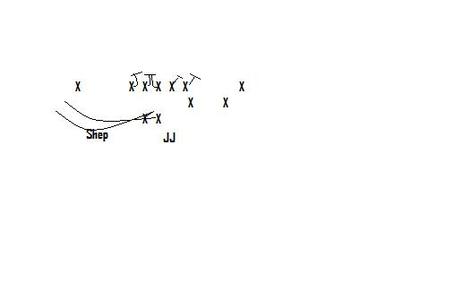 We ran this play in the third quarter, and I liked the wrinkle. We played off the earlier Shep fake on the zone/read and turned it into a classic option. Here, Shep jab stepped to the right, which froze the defense ever so slightly. Then we ran the standard option play. Barksdale allowed his man through, because he bit hard on the Shep jab step, and moved to the second level with Josh D. TT stalk blocked on the outside. An outside linebacker came shooting into the play, but JJ sucked him in and pitched it in perfect time for Shep to cut up field and gain nine. Very nice design. 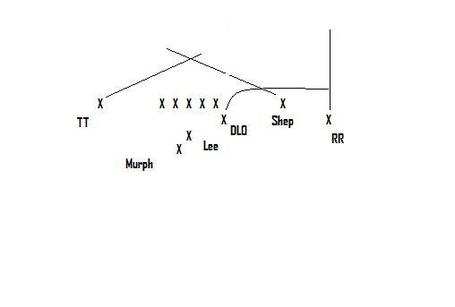 And this is the miracle 4th and 14 we converted to keep our season alive. One incredible simple design that was extremely well executed. TT ran a slant and the protection was outstanding and JJ found him on the other side of the field for a 1st down.

Why did it work? Tennessee played a Cover 2 defense. If you aren't familiar this means two deep safeties, and man coverage on the outside from the corners. TT runs a slant, which the corner releases to the linebackers dropping into coverage in the middle. The corner assume Murphy as his man. On the outside, Randle runs a go, taking the left corner out of the picture.

As Shep runs his slant, he's picked up by the left outside linebacker, who should be occupying the zone TT eventually ends up in. Shep runs a beautiful rub on him, making slight contact, interrupting his coverage, allowing TT to slip underneath him and into the open zone. The OL protects it beautifully, Lee stands in and throws a nice touch pass to an open TT who catches it and plows forward for a few extra plays. Very nice design, very nice execution.

I'm not a fan of Gary Crowton. Let's let that be clear. But my primary issues have more to do with teaching, recruiting, and building an offense rather than play design and play calling. But let me just say this, if this game plan is executed properly, we win this game going away.

Each of the past few weeks when I go back and watch the film, what I see is an offense that is sloppy and mistake prone. And I'm not talking poorly coached. I'm talking boneheaded, stupid mistakes. False starts. Fumbling while stretching to get an extra yard. Dropping a wide open pass. Fumbling an easy pitch.

JJ took (continues to take) a ton of flak for his subpar performance this game. I will say, while the two INTs were miserable, go back and watch the tape. He finished the day 3/10 for 38 yards. One incompletion was actually a completion that LSU didn't challenge. Another was an easy drop by TT. Now, does JJ throw an uncatchable ball? Perhaps. But the ball he throw TT wasn't bad, and it was right on target. The next play... he threw an interception. Plays like that have driven me mad regarding our offense. If TT makes that catch on 2nd and 9, we're probably running the football on 1st and 10 rather than throwing from 3rd and 9.

And it's not just one player or one group of players. There has been mental failure at every spot on offense. Like I said, I'm as much of a Crowton hater as the next guy, but it's extremely difficult to call a winning game when your guys are repeatedly shooting themselves in the foot. Honestly, LSU's offense has played with one arm this year (this is why Miles "calls bullshit on this team). And I don't mean because we have handicapped quarterback play. I mean stupid penalties and mistakes have severely hampered us. I can't tell you how many drives we have killed by doing something stupid. It's disheartening. Until those type of kinks are worked out, we are going to struggle on offense, and it doesn't matter who the quarterback is.