LSU - ULM: What to Watch For

Share All sharing options for: LSU - ULM: What to Watch For 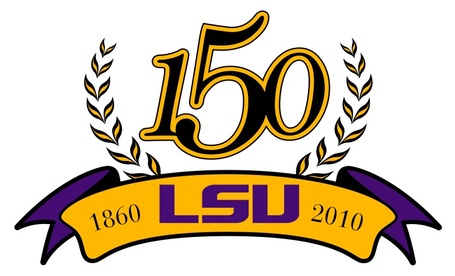 I know we're all focused on that thing involving that quarterback for that other team -- I don't remember a lot of the specifics -- but LSU does actually play somebody on Saturday. I suppose this game sets up as the classic letdown, and given the Tigers' last two performances against over-matched in-state opponents, this game shouldn't be totally discounted. Besides that, keeping the offensive momentum of last week going would be fantastic with two tough conference games remaining.

But first, I would be remiss not to talk about the Homecoming festivities on campus, including LSU Day, a part of the university's sesquicentennial celebration, which my office and I will be a part of. Allow me to refer to the press release:

As part of LSU's Sesquicentennial Celebration in 2010, as well as the university's Homecoming Week celebration, LSU will open its doors to the public Saturday, Nov. 13, from 9 a.m. to 1 p.m. for LSU Day - a free, fun-filled day of exploration and discovery, highlighted by performing arts showcases, tours and exhibitions showing off LSU's rich history, current offerings and goals for the future.

A special opening ceremony will be held on the event's main stage, located at the University Recreation Complex, beginning at 10 a.m. WBRZ on-air personalities Whitney Vann and Michael Marsh will serve as emcees for the event, which will feature the LSU Tiger Band, Golden Girls, cheerleaders and Mike the Tiger cheering for an LSU Homecoming victory.

"LSU Day is a wonderful opportunity for everyone to see what the state's flagship university has to offer to prospective and current students, the Baton Rouge community, the state of Louisiana and beyond," LSU Chancellor Michael Martin said. "In a time where we reflect on the impact LSU has had over the past 150 years, we also want to celebrate what makes LSU such an outstanding home for education, research and community involvement. It also is a time when we reemphasize our commitment to remain a powerful force in changing the future of Louisiana."

The festivities will be broken up into different districts, including the Field of Excellence at the University Rec Center, the South Campus Promenade along South Campus Drive east of Highland Road (where yours truly will be working, for those who have the overwhelming urge to meet me/punch me in the face*) and the Union Square, which is of course located in the Union.

The Field of Excellence area will feature some athletic department exhibits, including autograph sessions with some of the teams and former Tigers like Rudy Macklin, Ricky Blanton, Skip Bertman and Michael Papajohn.

If the weather doesn't hold up, the events will move inside of the Union. Also, don't forget about the Homecoming Parade - especially tailgaters, as it will affect parking and traffic. More information on the day, and a map of all the different exhibits, is available here.

*Note: Please do not punch me in the face.

LSU comes to the final quarter of the season off of its best offensive performance of the season. So was that a peak, or just the start of another incline? This game won't be the final answer to that question, but can it provide some hints. The Humanoids will look at the final score and the final stats, but the details will be more important. Are the quarterbacks decisive, efficient and look comfortable? Do the receivers catch the passes they should? How quickly does the running game exert itself (especially with a backup right tackle in)?

I don't expect any 75-yard bombs from Jordan Jefferson in this game - but can he continue to complete the more rudimentary throws that have troubled him? Can he lead scoring drives (especially touchdown drives) and avoid turnovers?

Chances are, Jarrett Lee will still be needed in the final two games. Can his teammates continue to keep him comfortable with a good running game and pass protection? Can Terrance Toliver and company finish the drill when he distributes the ball? These little things will be more important than big plays and highlights.

Both Ole Miss and Arkansas will have the advantage at quarterback in the final two weeks. So it's important for LSU's quarterbacks to at least manage the offense efficiently and avoid turnovers. We saw last week that when the little things work, the big things take care of themselves.

That goes for the defense too. Against McNeese, the Tigers made a couple of big plays but still allowed a near-50-percent third down percentage. I don't think the big plays are a problem there, but will there be that urge to choke ULM out?

If you're not watching Community, you need to start.

With new starters along the offensive line and in the secondary - the latter with freshmen continuing to emerge in major roles, reps are the key word. New starting strong safety Eric Reid, in particular, needs all the game action he can get before he faces veteran passers like Jeremiah Masoli and Ryan Mallett. Backups like Craig Loston and Tharold Simon will also likely see their roles increase. Keeping last week's momentum going for these young guys would be great.

Our steampunk emperor Mingo and partner Ken Adams could also use some more work on lane integrity and containment before facing another mobile quarterback like Masoli. Luckily, ULM's Kolton Browning does give the Tigers a look at a mobile quarterback in a spread attack (Browning is actually averaging more yards of total offense per game than Masoli, 265 to 218, and has just one less touchdown). Receiver Luther Ambrose is a player I saw a few times in high school at St. James -- the typical Wing-T speed runner -- and he has SEC-caliber wheels. The Warhawks (the fiancé hates calling them that) still have a shot at winning the Sun Belt, so this team is definitely an upgrade on McNeese.

This game can also be a valuable experience point for offensive backups like Michael Ford, Spencer Ware, Kadron Boone, James Wright and J.C. Copeland. Ware and Ford have seen their roles increase almost weekly, and it would also be nice to see them get some more work in the passing game, both receiving and in blitz pick-up. Plus, Stevan Ridley can use the rest. Copeland has flashed potential as a pretty devastating lead-blocker, and a team that still thrives on running the football can always use that.

Along the offensive front, watch the play of right guard Josh Williford, who was strong off the bench against Bama, right tackle Greg Shaw and redshirt frosh Chris Faulk, who is the backup left tackle but has cross-trained at right this week for depth purposes. There's even an outside chance of Will Blackwell making a return this week.

As great as it would be to see one of the quarterbacks throw two or three touchdowns and see Stevan Ridley creep closer to the 1,000-yard mark, I wouldn't count on it. Look for a lot of players to rotate in on a steady basis, and, even if the offense operates smoothly (and there's certainly no guarantee of that) , Les Miles will likely slow things down once the deficit gets near 30 points or so. If it gets that high.