An ATVS Salute to the 2010 LSU Senior Class

Share All sharing options for: An ATVS Salute to the 2010 LSU Senior Class

Lest we not forget, 15 seniors will say goodbye to Tiger Stadium on Saturday. Ten scholarship players and five walk-ons. I can't claim to know much about guys like Jonathan Nixon, Paul Felio, Zach Elkins, Jordan Newell and Richard Dugas (aside from Dugas' brief time as the starting fullback), outside of the fact that they've basically paid to get their asses kicked by football players for the last few years (though they definitely deserve their props for that). But I know that the progress of a lot of the young talent on this roster is due, in part, to some outstanding senior leaders, and there are a few all-time great Tigers among this group as well.

And here's a tribute to them.

Maybe I'm the only one who likes this meme, but that's good enough for me.

What more can I say about our beloved Cookie Monster? From the second he stepped on campus we all knew Drake Nevis had a lot of talent. As a true freshman he cracked the defensive tackle rotation next to the legendary Glenn Dorsey (who later endorsed Nevis as a future star) and even earned a start late in that season. Short, stocky and hell for an offensive lineman, Nevis fits the prototype of an LSU defensive tackle (like Dorsey, Kyle Williams, Chad Lavalais and Henry Thomas before him).

The sophomore and junior years were sporadic with some conditioning issues, but Nevis has made his final one in Baton Rouge count. He was a midseason All-American and seems a lock for the same honor at the end of the year. Nick Fairley probably has conference defensive player of the year locked up, but you can bet LSU's four-time SEC Defensive Linemen of the Week will get a few votes.  He's really blossomed under the teaching of defensive line coach Brick Haley, and has learned to combine his explosive strength (a school-record 374-pound power clean!) with excellent technique and hands. Size will be a negative against him come draft-time, but teams that are looking for a true 3-technique DT (think teams that use the Tampa-2 type of defense) will have their eyes on him, and he won't last long.

Here's a guy I'm personally going to miss. He's the emotional leader of this football team, his development the last two seasons has just been plain fun to watch.

KShepp came to LSU in 2006 with high school teammate (and current Washington Redskin) Perry Riley, with both cracking the starting lineup in the ill-fated 2008 Maleveto year. Like most of the LSU defense he looked totally lost at times, but all that changed once LSU hired John Chavis as defensive coordinator. And the Chief's earned his paycheck with his work with Sheppard. He's blossomed into one of the top middle linebackers in the conference, a classic run stuffer with the size to shed blocks and the speed to run backs down in the flats. He turned in 110 tackles and 8.5 tackles for loss last year and will surpass those totals in 2010 (he already has 9.5 tackles for loss). He's saved his best performances for the biggest games this season, with at least a half a TFL in every conference game, plus an interception and a fumble recovery against Alabama. 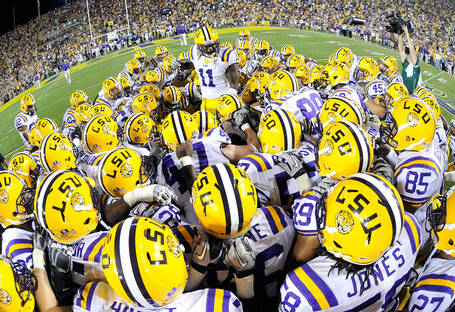 But more importantly, the thing I'll always remember about Kelvin Sheppard is his emotion, and the way he pours it into this team before every game. This guy loves being a Tiger. And that means something.

He was a surprise recruit in the 2007 class out of Detroit, but Barksdale didn't take long to crack the o-line two deep and never left. He's in this third year starting, and handled the transition from right to left tackle well. Outside of a few penalty problems, Barksdale has consistently graded out high and solidified the left side of the Tiger o-line with Josh Dworaczyk.

Some will remember the what-could-have-been with Murphy, who lost two seasons to knee surgeries at LSU, but always managed to show some flashes of talent. Even in a limited role this season, Murphy's been an outstanding pass-blocker at times, and deserves a lot of credit for helping get younger backs like Michael Ford and Spencer Ware ready to contribute.

Jasper may very well be the greatest kicker in LSU history. His career percentage of 84.8 ranks first in LSU and second in SEC history, and he also set a school record for field goals in a single game this season with five. He's 10-13 from beyond 40 yards, including 4-6 beyond 50. And if nothing else, few kickers can match this for a memorable moment.

I've been rough at times on this former five-star recruit, but we'll never know if his issues had as much to do with the quarterbacking problems of the last two seasons or just his own inconsistency. Still, Terrance Toliver has had his moments this season, like the two huge touchdowns versus Florida, and deserves credit for never letting the offense's struggles get him too down (he's also been a diligent run blocker). He'll have a better chance at impressing scouts once the season ends, and perhaps the NFL will provide him with a better canvas (and a better quarterback) to work with.

"Pep" won't go down on any all-time lists, but he's been a consistent contributor for three seasons now.

Ah, the walk-on made good. Graff earned a scholarship last year with seven special teams tackles and a blocked punt. He's actually one of the faster players on the team (and the cream in the Oreo of Explosion) -- and like I said earlier this season -- some NFL special teams coach is going to watch his tape and really want him.

Helton's been knocked at times for not always having great averages, but he's consistently been a strong directional punter, and is a big reason LSU has had just 23 of 109 punts (75 from Helton) returned for a total of 108 yards the last two seasons (75 from Helton).