LSU - Ole Miss: What to Watch For

Share All sharing options for: LSU - Ole Miss: What to Watch For

Senior day has kind of been a mixed bag for LSU under Les Miles. He's 3-2 in those five games, but the Tigers have actually been outscored by a combined 12 points. Houston Nutt, or Ole Miss, was on the other side of each contest. 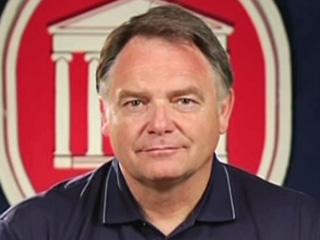 Billy, have you ever been in a...Turkish prison?

The Right Reverend's history should be known by most LSU fans by now (and chronicled by those much funnier than I), and we should all damn sure know better than to assume victory here, even over an Ole Miss squad in the midst of a pretty rough season. If the old revenge motif for the last two season wasn't enough to rile up Tigers or Tiger fans, a win Saturday gets LSU to its first 10 win season since 2007 and to its highest conference mark in that time. So this game is big.

I'm not sure how else to really describe this matchup of the SEC's worst passing offense against its worst passing defense (Note: Ole Miss is actually ninth in the league in passing yards allowed, but last in pass efficiency D, interceptions, and touchdowns allowed, so I feel comfortable with the "worst" title). The completely resistible force versus the totally moveable object? Feather versus air? Martin Prince versus Milhouse Van Houten?

Anyways, the point is this is a rare weakness-on-weakness matchup. Seven of the Reb-bears' (see what I did there?) opponents have passed for at least 200 yards, they've allowed 20 touchdown passes (10 of which have come on first down) and picked off just four passes. Of course, the Tigers have topped the 200 yards themselves just three times in 10 games, to go with just six touchdowns.

LSU may at least have a slight advantage in the receiver matchup (assuming they're vaccinated against the dropsies this week). At least it appears that way after watching the Ole Miss defensive backs flail about the last few weeks. Tyrone Nix might be the perfect defensive coordinator for the Humanoids. He damn sure loves aggressive, man-to-man coverage. Of course, when you don't have great defensive backs, you wind up getting scorched.

The temptation will be for LSU to attack this secondary first and foremost, but anybody by now that's been reading this blog (or, you know, watching LSU in general) should know my stance there. However, look for the slot receivers (hello, Mr. Shepard), tight ends and running backs (Spencer Ware) to maybe play a role this week.

Winning first down is going to be important for both of these teams, because neither one is all that great on third downs. So keeping those plays at a manageable distance will be extremely important. The Tigers convert a dreadful 25 percent of third-down passing situations, and Ole Miss' 36 percent isn't a figure to be proud of either.

Both teams will likely try and make that happen with their quarterbacks and running backs out of spread formations. For Ole Miss, that means Jeremiah Masoli and Baton Rouge-native Brandon Bolden. The SEC's sixth-leading rusher, Bolden is a player I've always been a fan of. He's a compact, hard runner with good speed, and is also an excellent receiver (he's pretty much the go-to guy on third downs). The Tigers haven't been lacking in running backs in recent years, but you do hate to see a local kid lighting things up for another conference team.

As for the Wild Samoan, Masoli's been a bit of a mixed bag for his new team. At times, he can be downright scary, as he's a stocky, elusive runner that can create big plays when he breaks contain. But he's also clearly miscast in the drop-back elements of Houston Nutt's offense, and doesn't make great decisions in the pocket -- evidenced by his 10 interceptions on the season. Most of those have come in Ole Miss territory or near midfield, which suggests that keeping the visiting team pinned back would be a good idea. In the red zone, Masoli's had solid success throwing it up to his bigger receivers, like 6-3 Markeith Summers and 6-7 Melvin Harris.

On LSU's end, the first-down sledding should be available. Ole Miss may be allowing just 140 yards per game on the ground, but that number is slightly padded by competition like Jacksonville State, Tulane and ULL (with those games factored out, its actually 163 ypg). In fact, opponents are gaining 4.5 yards per carry on the first down. Jerrell Powe and Ted Laurent are solid run-stuffing defensive tackles, but there just isn't a lot of speed/athleticism behind them aside from end/linebacker D.T. Shackelford. Look for the Tigers to use that short zone toss that's been so popular of late. It fits the running styles of Stevan Ridley, Michael Ford and Ware, and allows them to get to the edge if the defense can't pursue, or cut back inside if they over-pursue. Will Blackwell's return to the offensive line lineup will be very interesting to watch. He brings a unique enthusiasm and nastiness to the field. And I say it every week, but getting Russell Shepard involved in the running game wouldn't be a bad idea either. 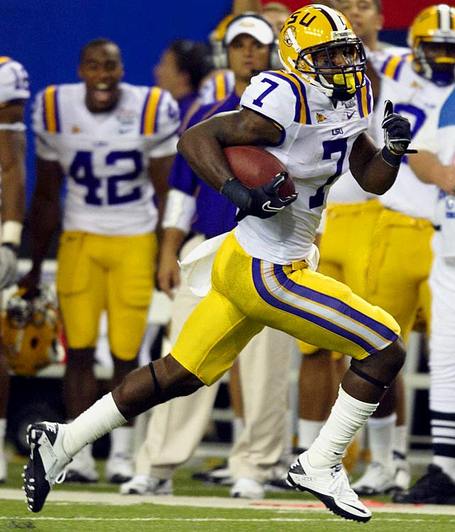 They always say that good pitching stops good hitting. And it's the same with good punters/coverage teams against good punt returners. We've seen that in the last few games, as Patrick Peterson has been relatively held in check by teams like Auburn and Alabama, who keep the ball away from the returner and swarm in coverage. LSU's own punt and coverage teams are also among the best at doing this.

As Ron White would say, I'm tellin' you that story so I can tell you this one: Ole Miss' punt teams blow. Chunks. Big ones, in fact.

Despite punter Tyler Campbell's 45-yard average, the Reb-bears have allowed a league high 26 returns for a league-worst 367 yards (an average return of 14.12 yards). That's more total returns and three times as much yardage as LSU has allowed the last two seasons combined.

Of course, ULM was basically willing to pooch the ball 30 yards or so to avoid keeping the ball away from General Zod. The question is, will the Ole Miss be that smart fearful of the great one.