Thoughts from the South Endzone: LSU v Ole Miss - Featuring the Largest Horn Section The Ides of March Ever Had

Share All sharing options for: Thoughts from the South Endzone: LSU v Ole Miss - Featuring the Largest Horn Section The Ides of March Ever Had 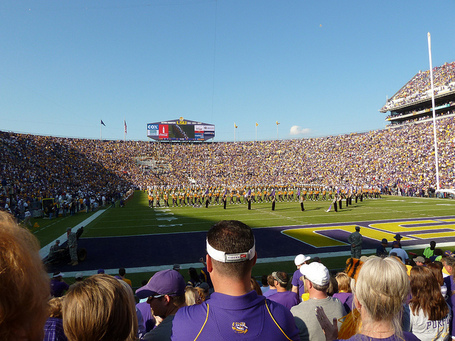 As always, all photos in this post were taken by me. You can find more and higher-res versions of all of these HERE.

Clear day to a cloudy, then foggy night. A full moon. An older man with a mirror axe. A reverend trying to out-gamble Les Miles on his own turf. Giant TV's on Airships. A late but very strong entry into the "Worst Officiated Game of the Year" I saw all this in the final game in Death Valley for 2010. To begin, a number to set the mood. 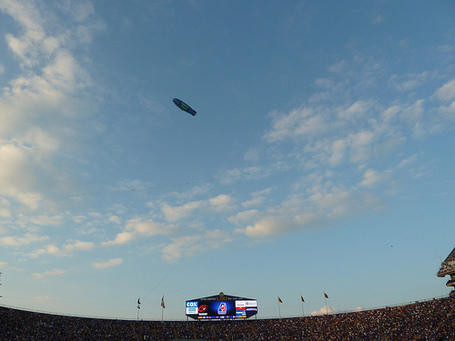 CBS finally ante'd up for a real blimp this time (past game's aerial footage has come from Cessnas doing repeated fly-by's.) The thought of Mike Slive watching from up there, cackling an evil laugh, crossed my mind more than once. Also, the giant LCD screen on the side was impressive, so much that someone next to me mentioned what a great idea it would be to put another game on it for a bit of real life Picture-in-Picture. 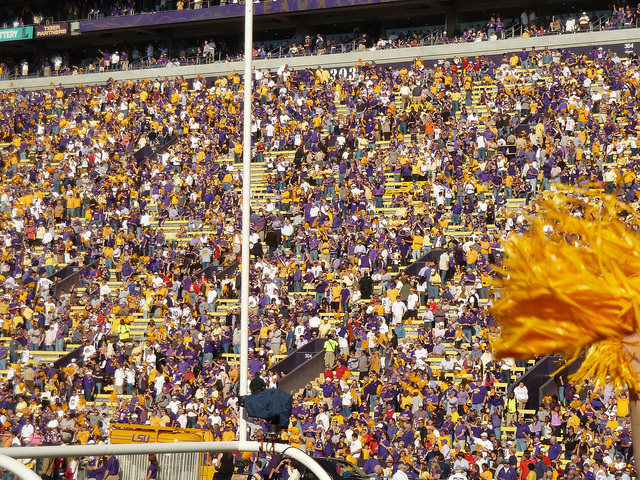 That's the East stands while the band is playing Pregame. Shameful. It got a little bit better as the 1st qtr went on, but that kind of attendance for a 9-1 SEC team in a rivalry game is pathetic. I urge you all to just turn over your seats now, as there are some of us who've been on the waiting list for quite awhile who will gladly show up to games on time.
I was having camera issues in the 1st quarter and missed capturing a few great moments 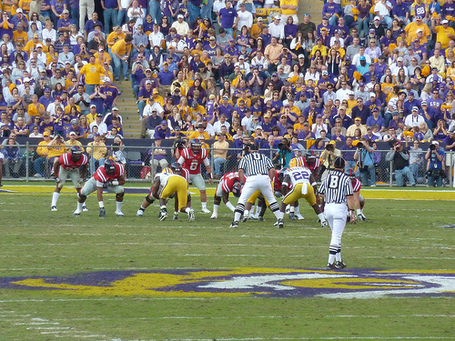 Aside from the 1st drive INT, the defensive struggles were maddening. It seems Masoli has some of that same talent that Cam Newton had, where he's got great escape ability when the pocket collapses. It eats at you when the D comes within inches of a sack, only to give up a 1st down because of a dodged tackle. And I believe we can all now understand the nearly crippling mental blow Florida fans felt that comes when your opponent converts 4 4th downs. Any more than that is probably banned under treaties.

/BANDGEEKRANT
It's been a little rough, this first year in a long time without Wickes at the helm, but I'm pleased. The band has markedly improved in both volume and quality to my ears. And I hope All I Do is Win stays in the rotation.
I'd also like to make a note to the folks in charge of the piped-in music. The Old Skool dance breaks were awesome. If those were the only kind of songs played on the PA, I wouldn't have a single complaint. 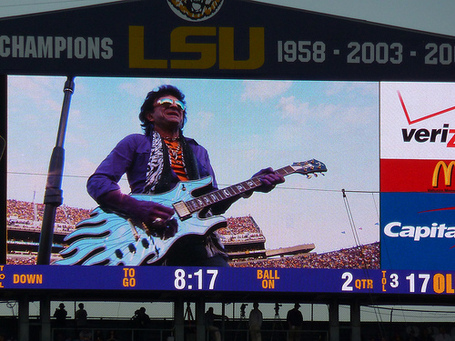 So now for the mirror axe bit. Jim Peterik, front man for Ides of March and Survivor, and songwriter for nearly everything in heavy rotation on Eagle 98.1, was inducted into the LA Music Hall of Fame this year and came onto the field to play a couple of his hits with the band. It's not an overstatement to say this didn't look like a good idea at the start, but it turned out exceptionally well. Vehicle sounded great, and It was obvious he's still got the vocal chops. More than that, everyone who had been scratching their heads trying to figure out who he was immediately recognized him once he started singing. His guitar wasn't miced properly though, which kinda brought down Eye of the Tiger, as he did an admirable job on a lead vocal part that's probably a few octaves too high for him.
Overall, it was great. I know there are some out there who think LSU's gone overboard with the whole "Eye of the Tiger" motif, but I loved it and so did the crowd. Idea for next year: Get Bill Conti and the rest of Survivor down here and do a Rocky show.
There's a video of it all HERE, but I can't embed it.
/ENDBANDGEEKRANT 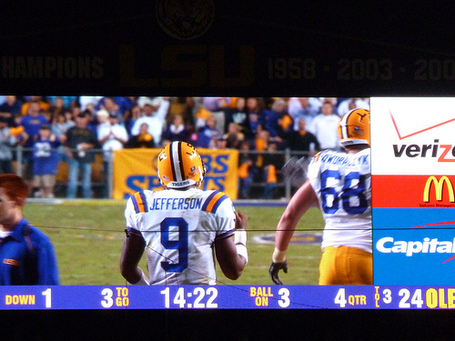 You know what didn't happen in this game? Jefferswag never got booed. Sure, there was consternation at the INT and the sack, but there is a difference and the regular boo birds in my section very clearly made notice that all of their ire was directed solely at the coaching staff.

...except when DeAngelo gave up on that route. Half the stadium wanted him benched before the play was blown dead. 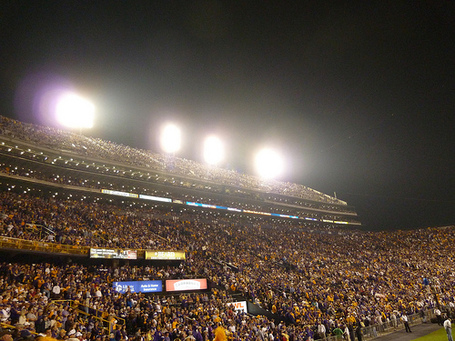 The sun goes down and it gets properly dark very quickly in the 4th Qtr. At some point I notice my glasses seem a little foggy, only to discover some very ominous light fog rolling in. Ole Miss fans repeatedly do a Hotty Toddy, which is soon overwhelmed by a stadium-wide "Geaux to Hell, Ole Miss!" Hat tip to the students for starting that one. 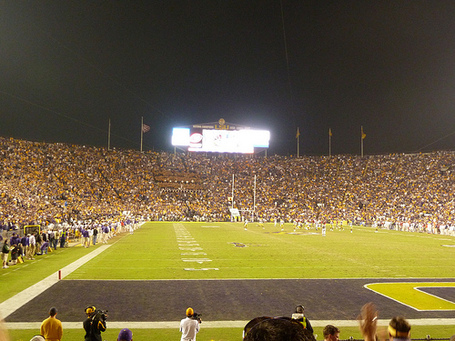 Another moment I missed capturing: After catching the final pass INT, PP7 runs straight towards us and hands the ball to a kid at the fence, then proceeds to shake hands with every fan as he walks back around to the band. Dan Borne says thanks for the memories and we all know we've just seen him play his last snap on this field. We're gonna miss you Zod.

After meeting Joshua again, I make my way towards the exit. Some kids running a concession stand are shouting like carnies, trying to sell off the last of the hot food. I stop and buy a corndog. It tastes horrible, but I don't care. It'll be nine months before I can make that mistake again. 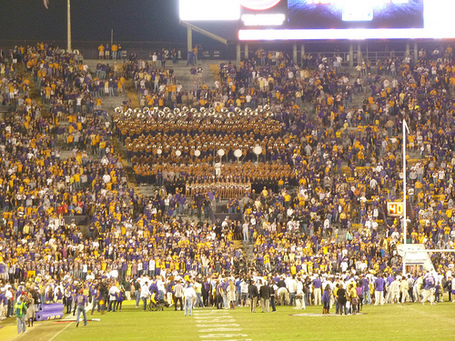 I hope you have enjoyed these stadium summaries, and indeed all of ATVS for the past 12 months. Last year's debacle at Ole Miss was the first weekend I took over for Pittman. It's been rough and we haven't always been consistent, but for some strange reason y'all keep coming back. We've had amazing growth this year and broke our own visitors and page views records every single month this football season (including the very special milestone of having more visitors in October than Death Valley's official capacity of 92,500) I've met quite a few of you out at the tailgates and despite my request, none of you have yet dared to tell me how piss-poor of a job we are doing. Thanks for that from all of us here at this "Coonass Cesspool"