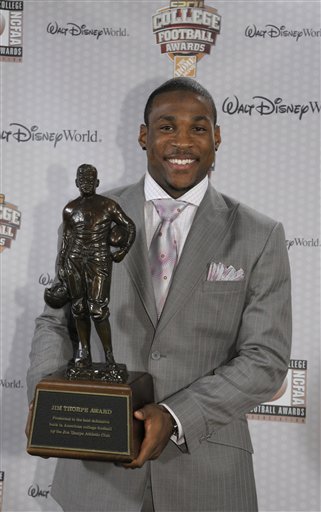 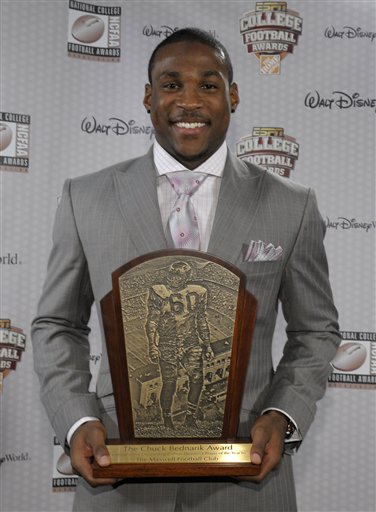 Your 2010 Thorpe and Bednarik Award Winner

The awards keep coming for PP7. After being the first person in the history of the SEC to win both the Defensive and Special Teams Player of the Year awards, Patrick Peterson won both of the awards he was a finalist for at the ceremony in Orlando last night. He's now headed to California as a finalist for the Lott trophy.

Also announced by the league yesterday, Barkevious Mingo, Sam Montgomery, and Tyrann Mathieu were all named to the SEC All-Freshman team.

Not to be outdone Susan Jackson picked up the SEC Female Athlete of the Year Award for 09-10 earlier this week.

Some disturbing news from Nashville last night, as it appears Vandy has finally decided to take this whole "football" thing seriously. They are reported to have offered Gus Malzahn a 3 MILLION DOLLARS PER YEAR contract to become the next head coach. Vandy has always had a lot of cash to spend, but they always seemed reluctant to do so when it came to athletics.

The NCAA is thinking about changing the baseball playoffs to start with 2-team best-of-three Regionals, followed by 4-team Super Regionals, basically the opposite of what happens now.

The most significant effect of Urban Meyer's retirement should be surprising to no one: The SEC East is going to be a crapshoot next year.

If you didn't watch the award show last night, the highlight was definitely the Lee Corso tribute. It's posted after the break.