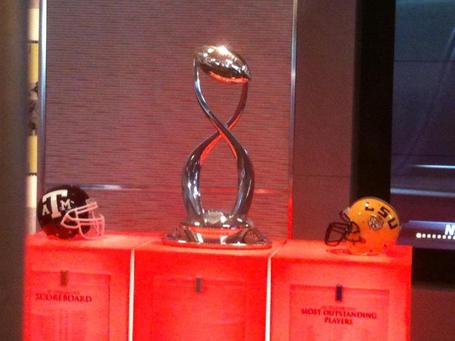 The Cotton Bowl Trophy. It definitely looks like something from Jerry's Space Palace (from wherever Doc Saturday found it.)

Football Practice resumed on Wednesday. Miles talked to the media afterward about all topics (underclassmen practice time, A&M's strengths, practice schedule, Mettenberger, even Urban Meyer at one point) There is a video, courtesy of the Times-Pic, after the break.

Speaking of Mettenberger, his LOI is in but due to Clearinghouse issues, he likely will not participate in any bowl practices. And former LSU QB Chris Garrett, who left to Natchitoches for still vaguely murky reasons last fall, is now heading for Ole Miss.

There is only one man in the SEC who was a consensus All-American this year. KNEEL.

The Men's team suffered a mild upset on Monday night, falling to Coastal Carolina in OT, 78-69. (Hey, It could be worse) They'll try to get off the snide tonight against McNeese St. @ 7pm with live TV coverage on Cox Sports, the second game of a rare Women's - Men's Doubleheader. CTJ talked to the media after practice yesterday, the video is after the break.

Meanwhile, the Ladies are playing UT-San Antonio this morning @ 11:30 am and in a rather neat promotion are filling the PMAC with kids from the East Baton Rouge Parish schools. Make sure you fill out your permission slip before you get on the bus.

For you baseball fans out there, The NCBWA Preseason All-Americans list is out and the only 1st teamer from the SEC is SCar's OF Jackie Bradley Jr., hero of the 2010 CWS (saw him play in person at the CWS, definitely worthy of the honor).  The loud thud you heard yesterday was the NCAA coming down very hard on the Arizona State program. Because of a myriad of major violations during 2007 (when they were on probation for violations that occurred in 2005) the Sun Devils will lose scholarships, vacate wins from a CWS appearance, and are banned from the post season this year. The since-fired coach will also have recruiting restrictions that follow him to his next job. This marks the 9th time ASU baseball has violated NCAA rules since 1954, the most of any program.

Our boy Mark Emmert made some comments in Indy this week that the NCAA might be calling an emergency session to close the loophole Cam Newton used to get out of his father's trouble scott-free. The recently resurrected Bylaw Blog explains the tough situation the NCAA is in with trying to come up with fair penalties for this sort of thing.

Mark Cuban wants to buy an NCAA D1-A football playoff. He's certainly got the money for it.

Need to laugh at the ineptitude of the Big Tweleven? This should do the trick. Leaders and Legends indeed.

Speaking of, Jim Tressel wants you to know he ain't skeered a' no SEC team.

After Malzahn shunned the 'Dores, it looks like Vandy will settle for Maryland Coach-in-Waiting James Franklin.

WVU has hired Okie St. OC Dana Holgorsen as a Coach-in-Waiting behind the whittle master himself.