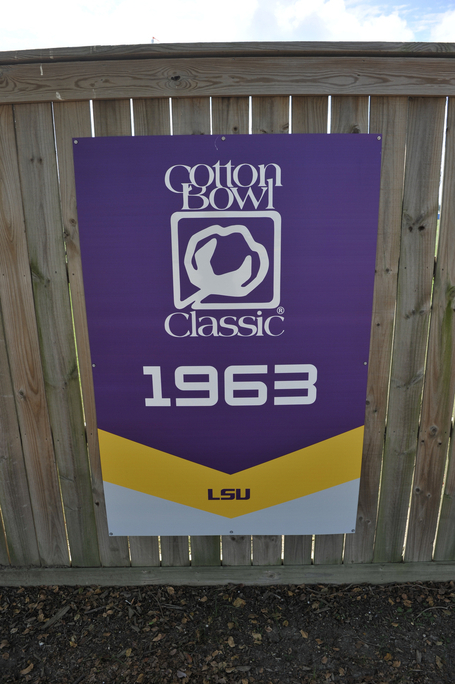 Photo via the LSU Publications Dept. Blog. They recently redesigned all of the signs on the long fence on Skip Bertman Drive and put in great effort to find all of the old original bowl logos for each game.

Football had it's last practice on Wednesday and is off until Monday. Word from the NCAA on Stevan Ridley's appeal is not expected until sometime late next week. The @Miss St. game for next season has been picked up for an ESPN Thursday Night special on Sept.15. It will come on a short week after the only home game in September next year, an epic clash with Bradley Dale Peveto's  NW St. Demon's from Natchitoches.

You've probably heard about Ohio State's Tattoos-for-Jerseys program and it's convenient suspensions. Terrelle Pryor probably shouldn't hang around to serve the suspension. Meanwhile, the NCAA is getting lambasted for just making this up as it goes along.

I think it's the last one for the year, as Patrick Peterson has made ESPN's All-American list as well.

LSU made Doc Saturday's list of the 10 best plays of 2010 twice. Only one that we are proud of.

Mark Cuban's Playoff hopes have been dashed thanks to a patent involving pontoon boats.

A note from the Advocate that K.C. Ross-Miller, a highly-rated point guard in last year's recruiting class who failed to qualify because of a problem with his course work, is now playing for UNO, who's players only have to pass admissions while UNO transitions to D-II. It's not out of the realm of possibility that he could make it back to LSU someday. UNO is currently lead by former LSU walk-on Zach Kinsley who transferred after we ran out of roster spots for walk-on's.

Also in basketball, there was a brawl in the stands between two Miss St players during a tournament in Hawaii.

Merry Christmas Everybody, see y'all on Monday.