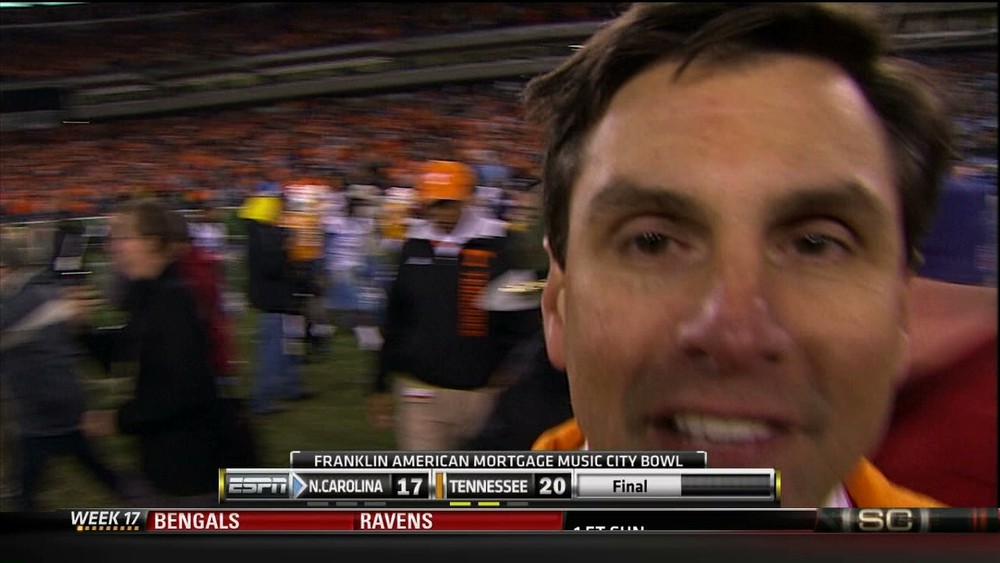 You may not have watched the Music City bowl last night, the first SEC bowl of the year and a coincidental matchup of two teams who lost games in the final (and sometimes past final) seconds to LSU this season. Of course it was destined to end in abject insanity. Thanks to a sequence of successful clock mismanagement, 17 players on the field for UNC, and baffling but remarkably correct officiating that is difficult to comprehend, despite what the image above shows, UNC won in 2OT, 30-27.

The key takeaways for LSU:

This puts LSU's opponents at 1-2 on the bowl season, with the next appearance being the SEC-B1G triple header on New Years Day.

Football will take today off and travel to Dallas tomorrow afternoon after a light morning practice. In Dallas, all practices will be at Cowboys Stadium in the afternoon. The Team Hotel is the Hilton Anatole in Arlington.

The post practice interview from Wednesday is after the break. Skunks are involved.

Don't tell Jerry, but Derek Helton is aiming for the TV.

The Official LSUSports.net site is reviewing It's most popular items of the year. The biggest story was the April Fools Purple Turf (which was still getting picked up as a real story as recent as AUGUST) and the most popular video was a Big Cat Drill from last spring.

Meanwhile, the Publications Dept has put out their own selections for football photos of the year.

LSU spent over $25 Million dollars on football for the fiscal year ending in June of 2010, good for 3rd in the SEC behind Bama and Auburn and 5th nationally. LSU Football also turned a profit of more than $43 Million dollars on the year. As is the case in most of the country, Football supports almost all other sports, with the entire athletic dept. generating about $7 Million in profit from a revenue of nearly $110 million dollars. Interestingly, last year Men's basketball turned a profit of over $2 million, but almost all of it was needed to cover the costs of the Women's team, which operates at a great loss. Baseball is unfortunately lumped into the All Other Sports category, but I would love to see what kind of revenue/profit that is generating.

Those of you with time to kill at work should peruse the official Dept. of Ed. site which released this data. LSU's report is HERE.

The CEO of the Sugar Bowl lobbied to keep the Ohio State players eligible for the bowl. And Tressel is allowing the players to play in the bowl only after they pinkie swore to come back and serve their suspensions next year. Jim Tressel is a fool.

Everybody hates Nick Saban (except Bama fans, I think...)

No games until the Ladies take on Tenn. In the PMAC on Sunday in the SEC opener.