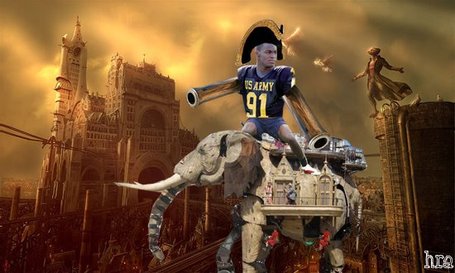 I always have a few choices for what I lead off with, but today was easy. It would seem our fearless leader, lord, and master, Steampunk Emperor of the Kingdom of Mingovia, will allow the peasants to chose a new Name of the Year instead of thoroughly crushing the competition again. Praise our emperor for this mighty show of compassion.
So the long nightmare is over now. Tasmin Mitchell ends his stellar career at 1989 points. Hawthorne said it alot on the radio, but it bears repeating that we may not see another player like Taz for a long time.
Ready to stuff a ballot? The NCAA is polling for the All-Time Rosenblatt Team and quite a few Tigers have been nominated. Do your civic duty.
News from Spring Ball: The 5-man rotation on the OL isn't happening or at least not in practice so far. Dandy Don is off IR and back at practice. And here's Toliver not catching a pass.
Series with Kansas starts tonight at 7pm. Landry (Hammy) will likely join Ranaudo on the bench this weekend, Johnny Dishon will likely get the start.

After the break, THE MOST IMPORTANT NEWS IN THE HISTORY OF LSU...