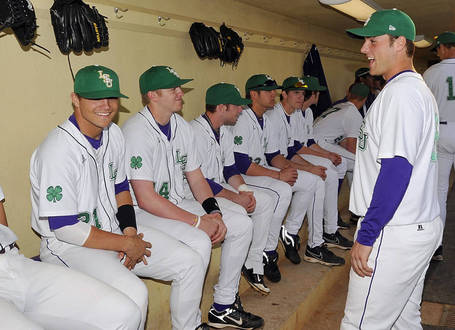 As Spring practice continues with no real news, fans gotta find something to keep the interest. Ever Since Coach Dabo at Clemson broached the idea of a spring scrimmage against UGA, everybody is theorizing potential spring match ups. With no real out-of-conference rivals to speak of, the obvious choice for the Tigers is cross town Southern. I like the idea, and it certainly would do something for the flagging attendance at the spring game. Whacha think? Poll Below.

Last night was a victory for America over those silly commies, 10-3, and stealing bases in the 8th up 8-2 is just like pushing your boot down a little harder. With the exception of that early homer, Matulis pitched very well and was used sparingly enough to be ready for this weekend as well. And Gaudet's slump is officially over. We seem to have settled on Delatte at 3rd, but only because he's the best we've got. I'm not thrilled, but it's not like Delatte is bad at his job. Also, some bad news from White Sox camp as J Mitchell tore a tendon jumping into the wall for a catch. He's out for the year, plenty of time to work on his material...

Russle Shepard's campaign for SG may have ended early on a technicality. EDIT: The Election board has re-instated Shepard's candidacy after learning he missed required meetings due to his class schedule. ATVS has not officially endorsed any candidate, but nobody has asked either. is now obviously supporting the "Geauxing the Distance" ticket.

After the break, Post Practice Interviews with FB's Dugas and Ridley