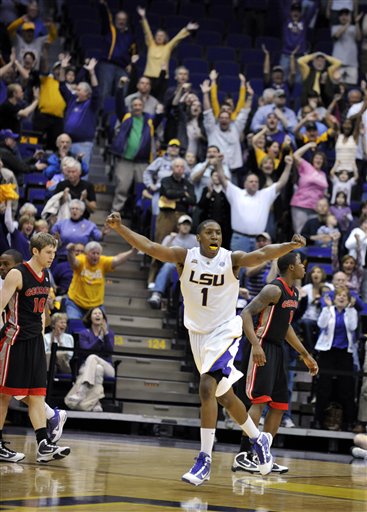 "I just thank God for this," Mitchell said. "God and Bo Spencer."

It could not have been scripted better. After a season full of games where things never went our way, finally it was the other guys who couldn't get off the final shot. Spencer's long 2 sealed the 50-48 victory. Mitchell had a fantastic performance with 20 points that puts him at 1,979 with the only the opening round of the SEC tourney left. We will play #13 Tennessee Thursday @ 3:15 (SECNet). Full Replay of the game after the break.

The drill has the team standing in circle and cheering as two of their mates go head-to-head inside the ring, offensive line men vs. defensive linemen, running backs vs. linebackers and receivers vs. defensive backs.

Baseball swept the weekend, with an impressive pitching performance by Bourgeois and Rittner. Who's worried about not having Ranaudo? (Before you get the shakes, he's due to start Sunday against Kansas) No rest for the weary as we start a 5 game week against USL on Tuesday then travel to Shreveport for a game against Natchitoches on Wednesday.

The Lady Tigers did not have a great weekend, getting bounced from the SEC tourney in the 1st round by Vandy, 63-61. Despite a 15-3 lead to start the game, and some valiant work in the final minute, LSU did not make the Saturday round of the SEC for the 1st time since 2001.