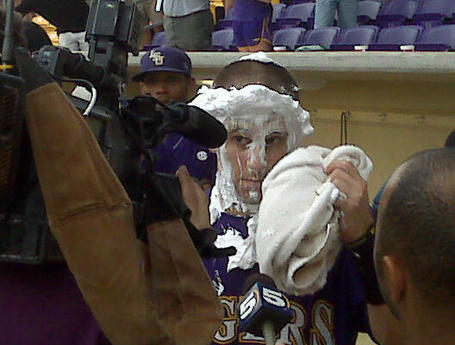 Dozar gets the shaving cream for the walk-off. Picture from the Twitter feed of LSU Asst. AD Craig Pintens

What a great weekend of baseball it was. Friday was exactly what every LSU fan wanted to see. Ranaudo was back in form pitching 6 innings with 8 K's while Dean got off his slump and nailed two dingers to right. Saturday's huge crowd set both the paid (12,313) and actual (10,019) attendance records and saw a fantastic game with 3 solo homers in the 2nd, including back-to-backs by Nola and Dean. Bourgeois had a good 5 1/3 outing with 7 K's and Ott put the clamps on a late Bama rally, closing the last inning and a third. Sunday's 14 inning marathon for the sweep saw impressive outings from both Matulis and Ott, with Ott pitching both a career and LSU-staff high 7 innings in the long stalemate. Dozar's solo shot in the bottom of the 14th for the win was his 1st of the year. It's a long week ahead for baseball with the NSU "home and home" followed by a road series at Ole Miss.

Down the road aways, Softball completed a sweep of the Hawgs on Senior Day.

The Alumni Gold Track meet saw current Tigers set the fastest marks in the NCAA this season and former Tiger Neisha Bernard-Thomas break the Bernie Moore track record in the 800m that had been held for 26 years.

Basketball began spring practice at 6am this morning.

After the break, the Ben McDonald jersey retirement video.