Things I like about the 2010 football team Part 1: O-Line depth and you

Share All sharing options for: Things I like about the 2010 football team Part 1: O-Line depth and you 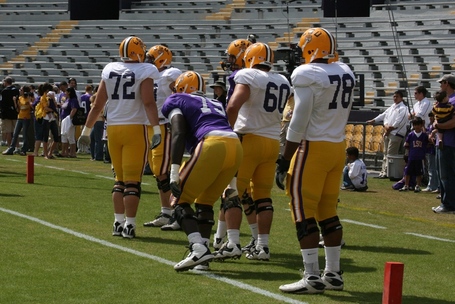 Why did our offensive line underwhelm in 2009?  I put part of the blame on 2006.  In 2006, we recruited five offensive linemen, and lost four of them to attrition and the fifth to injury.  And when it comes to O-Line, you reap what you sow.  In 2009, we saw the problems that arose.  We had to make due with an O-Line that was thin in both senses of the word.  This is why I think we'll be better this year.

I remember last year during spring football, we were only two-deep along the line.  It looked a little like this:

That's it.  Just eleven O-Linemen.  It's worth mentioning that we did have Cordian Hagans and Matt Branch on roster, but they were still making the transition to the offensive line.  After the spring, we gained those two and also added Josh Williford, Chris Faulk and Stavion Lowe.  We also had a freshman come in early, and that is Evan Washington, so the depth chart for this spring looked like this (Feel free to correct me on some things.  I'm not sure which of the backups play what.

*Parsons isn't really a Center.  He's listed at fullback right now, but he's still very big, so I count him as part of our O-Line depth.

So why all the new depth?  Because our O-Line recruiting has become more successful.  Let's take a look:

Phil Loadholt- Gone (Didn't qualify, went to Oklahoma and is now in the NFL)

Mark Snyder- Injured (His knee got blown out.  Who knows what could have been?)

Zhamal Thomas- Gone (Kicked off after '07)

I choose to disregard Snyder in terms of attrition, but LSU still went 0-4 on O-linemen in 2006.  Les learned not to take guys with academic issues.

Will Blackwell- Starting (Outside of Hurst, Blackwell has been generating the most O-Line hype this spring)

Josh Dworaczyk- Starting (Josh D. has bulked up above 300 pounds and won the spring award for leadership on offense)

So we went 4-6.  I still consider this a successful O-line class since all four of them have started and contributed.

Alex Hurst- Starting (Hurst is the definition of "big ugly", and he has the potential to be a monster at Right Tackle.)

Thomas Parsons- Still Here (Finished last season as our fullback.  Still a big dude, I presume he still provides depth along the O-line.)

Clay Spencer- Still Here (Clay's been buried in the depth chart, but depth is important)

Carneal Ainsworth- Gone (decided his heart wasn't in it)

Stavion Lowe- Still Here (buried right now, but you never know who's going to suddenly blow up into a star)

Add in already-enrolled tackle Evan Washington, guard prospect Elliot Porter, and center Cameron Fordham, and it looks like the O-Line will have the numbers it needs for some time, especially considering that there's a few guys at TE and DE who could make the move to the O-Line.  What's more, the 2011 class already has La'El Collins and Corey White, both of whom are very good prospects.

When it comes to O-Line, recruiting is tricky.  High school O-Line prospects are usually about 6-5, 270, so it's hard to get a wager on if they can add the extra weight, how well they will perform with the extra weight, and how mean can they be and other things that a 40 time can't answer.  And watching them dominate against 190-lb defensive linemen isn't all too helpful.  Consider also that injuries cannot be forseen, and attrition is just one of those facts of life.  S

What I'm trying to say is that we have fixed the issue of O-Line depth by recruiting well at the O-Line position in the past few recruiting classes.  Whether we will fix the issue of O-Line performance is something that remains to be seen, but early impressions based on spring practice and the spring game have been favorable, to say the least.