Share All sharing options for: GAMETHREAD: @ Natchitoches (in Shreveport); 6PM 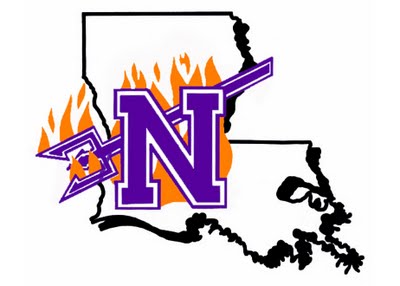 I've seen the new demon logo, don't like it one bit.

I'm not trying to knock Natchitoches (a fine small LA town, their Christmas festival is well worth the drive), but I'm very glad this game got moved to Fair Grounds Field in Shreveport. Should be a great crowd on hand, not Zephyr Field numbers, but much more than Brown-Stroud would have held (though i hear they've made significant improvements lately.)

The Demons enter the week ranked 30th in Collegiate Baseball News (don't knock it, it's a good poll) and it's well deserved. Northwestern is 25-10, 12-5 in a decent Southland Conference featuring also ranked SELA (though they have not played each other yet) They're 8-6 against common opponents USM, ULM, USL, Alcorn, McNeese, Nicholls, and Centenary. They also have a huge road win against then-21 ranked T A&M in College Station. A few early Regional projections have them just on the outside of making it.

Their starter tonight, Luke Irvine, is coming off a 7 inning, 2 hit shutout on Friday (it should be noted NSU run-ruled UT-SA twice last weekend). The team as a whole is on a bit of a hot streak, raising the team average from .309 to .330 in the past six games.

Per last night's radio show (posted below the break) Mahtook will sit these two games to recover from "illness" he was playing through last weekend. Also Gibbs will get a break and slot in at DH. Other lineup changes

Grant Dozar to C (only to relieve Gibbs tonight, he has locked the 3B spot)

Ott, Ranaudo, Bourgeois, Matulis, and Mahtook did not travel

Weather is very cloudy and cool, lows in the 50's tonight.