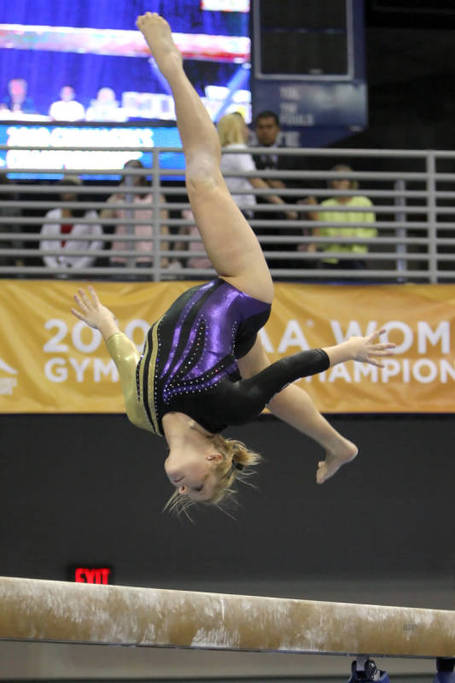 See more images from the NCAA Gymnastics Finals at LSUSports.net

Another day, another National Championship for Susan Jackson, this time in the beam exercise (as seen above, getting vert) with a near perfect 9.9625. The #23 Greatest Tiger of the Decade ends her career with 3 national championships (including this year's all-around) and numerous SEC titles.

In the same meet that saw Usain Bolt shock the world again, LSU T&F had a stellar day at Penn Relays. JR Walter Henning was named Collegiate Men’s Athlete of the Meet thanks to his amazing hammer throw ability.

Softball got through the rain this weekend to sweep Kentucky on the road. Fico and Jessica Mouse both earned SEC Pitcher and Player of the Week for their performances.

The Tigers have little time to dwell on the pain of being swept by the Rebs with a road series at #6 UF this weekend. Mainieri's judgment is far from being questioned (as well it shouldn't), but Rosetta at The Advoc isn't the first person to pick up the "Make Ott a Starter" banner. Midweek tonight against Soon-to-be-D3 UNO at The Box.

Conference expansion talks have slowed considerably since the BCS directors meeting last week, but SEC Commish Mike Slive was quick to bring it up in a meeting with regional AP sports editors.

It was a decent but down year for Tigers in the Draft. An update from the Times-Pic says Ciron Black has not been signed and many rumors are going around of a sustained knee injury that is keeping teams away.

Womens Golf has earned a 7th seed in the Stanford regional of the NCAA finals.