Maybe it's a good thing LSU isn't as passionate about basketball as other schools.

Share All sharing options for: Maybe it's a good thing LSU isn't as passionate about basketball as other schools. 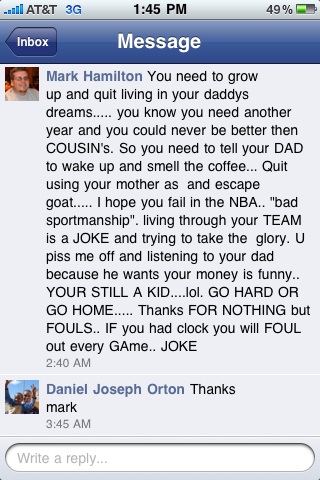 This is a Facebook exchange in which some dude named Mark Hamilton has some irate words for Kentucky freshman big Daniel Orton.  I'm sorry, but this is just disgusting.  Neither passion nor drunkenness can excuse this kind of belligerence towards an eighteen-year-old.  Daniel Orton was not a huge success during his freshman season, averaging just 3 points and 3 rebounds in just 13 minutes a game while playing behind Patrick Patterson and DeMarcus Cousins, but if he wants to depart for NBA riches instead of stay another year and play for ungrateful losers like this one, I wouldn't blame him.

All in all, if you are tempted to do something like this towards an athlete on one of your own teams, do everyone, including yourself, a favor and GET A LIFE.