Vote for the CWS Legends team here and vote on the new license plates here. IT IS YOUR DUTY.

One of 2 5-game weeks started last night and a 17-5 final hides the bad news. Alsup had a downright horrible 2nd inning, giving up 4 runs and 5 hits. Mainieri started warming someone, but thankfully Alsup got out of it and only gave up one more run all night. I have to believe Alsup would have been pulled if not for the full docket this week, but maybe being forced to dig him self out of his own hole will help his confidence down the line. In relief, LaSuzzo was fantastic with 7K's in 3 innings (woulda been 6 straight in there if ump wasn't blind) No mistakes from the bench guys after the mass subs in the 7th, but there were only 2 balls in play once they came in. Meanwhile, Mahtook may never leave the lead-off spot after being the 1st Tiger to hit for the cycle since Aaron Hill in '03 and had 3 steals on top of it. Dean was great, though he still didn't hit a long ball and Dozar was ok at the plate subbing for Gibbs.

Then again, it was Alcorn St.

After six years heading the Swim and Dive Team, Adam Schmitt unexpectedly resigned yesterday. Based on Alleva's statements, it was an amicable break, but no reason was given.

Dandy Don reports DE Quentin Thomas has given a verbal for the 2011 class. Don has him listed as the #12 player in LA.

It's the last week for the Alex Box Auctions. And I think they are starting to scrape the barrel(though these would make for a kickin' tailgate stereo) 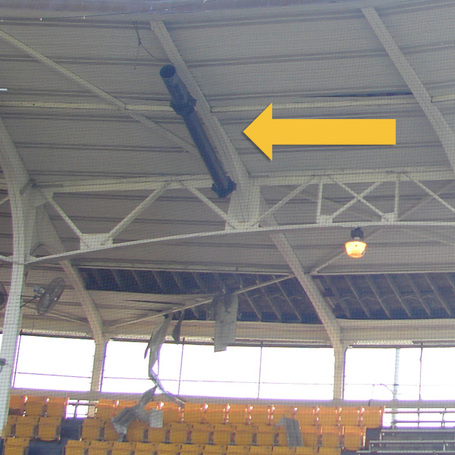 LSU put out the annual list of Former Tigers on MLB starting rosters. 8 this year, including, Aaron Hill, Ryan Theriot, and Coon's Corner favorite Nick Stavinoha. Those who caught Saturdays game on FSN will remember that J. Mitchell will spend the year with the Chicago Crutches (and will make some serious cash in the process).

After the break, Monday's CPM Radio Show (you have to skip ahead to about the 12 minute mark for the show start.