The Road to Omaha runs through Baton Rouge

Share All sharing options for: The Road to Omaha runs through Baton Rouge 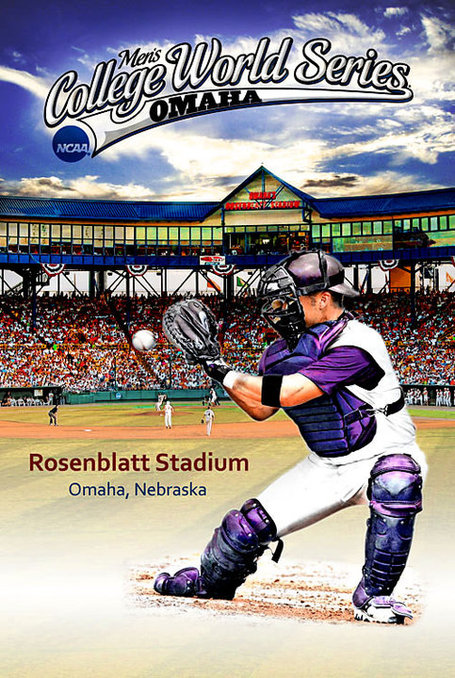 This great bit of art was found on facebook

With 2 weeks till Hoover and no midweek game to occupy my time, I got to thinking about what LSU's postseason will look like and realizing that we may be facing the prospect of few, if any, postseason games in the friendly confines of Alex Box. How would LSU perform on the road in a Regional or Super? I can't even remember the last time LSU didn't at least host a Regional when it was in the post season. So I hit the web and put together a little refresher of LSU's impressive post-season history.

Certainly for LSU, winning in Omaha comes naturally. Thanks to a very supportive crowd of locals and our own traveling carnival of fans, the Tigers have the 3rd best all-time winning percentage in the CWS (35-20, .636), behind only Dedeaux's USC(74-26, .740) and strangely Minnesota(17-7, .708). Getting there has been just as commonplace in the modern age, as long as that trip starts at home.

Before we continue, lets make note here of LSU's lone pre-Bertman postseason appearance. Coach Jim Smith's 1975 squad went to the Starkville regional and handily beat Murray State, 7-2, before losing to Florida State, 2-4. We were then eliminated by Miami, 1-8, who would, just few months later, hire a promising Miami Beach High School coach as a new assistant.

It's a story we all know and love. Hot off a recent championship at Miami as an assistant, Bertman comes to LSU for his first college Head Coaching job and immediately brings unimaginable success and championships.

Until quite recently, the NCAA put a big emphasis on selecting host sites based on not only merit, but that site's ability to fill a park. Thanks to the tremendous support LSU Baseball gained from very early on in the Bertman tenure, Baton Rouge hosted a regional in just it's 3rd ever post season appearance. Since '90, if LSU has a post season, it starts at home. The capacity crowds translated into one of the most dominate home filed advantages in college baseball post season history. In this era we only lost a home regional twice, both to Augie Garrido's CS Fullerton. On the road we were 2-1 in getting out of our Regionals, our lone loss is to Lamar in the '85 Central Regional, Bertman's second season.

In a move originally designed to give more teams a shot at the post season (though most believe it was just a way to push the CWS back into late June, a time period best suited for the new TV contract with ESPN) the NCAA added the Super Regional bracket in 1999. In this new format, LSU would enjoy continued success, as long as we stayed home.

LSU has never won a Super Regional it didn't host, always eliminated by the Super's host team ('99, Tuscaloosa, Bama; '01, Metarie, Tulane; '02, Houston, Rice). The home dominance in the now easier Regional round continued, with only one home Regional loss to Rice near the tail end of Smoke's tenure.

So what does this all tell us? Despite all of our current woes, most predictions still have us hosting a Regional round and, while we would need a lot of help and a spectacular appearance in Hoover, hosting a Super is not out of reach. The prospect of a Super Regional on the road is the most likely outcome. These will probably be the most difficult games of CPM's tenure so far - a playoff series against a hostile crowd.

Should this slump continue, however, LSU will enter nearly uncharted waters. Its been more than 20 years since LSU was last on the road for a regional and we would likely be at a close-by SEC host (Arky or Ole Miss) or another nearby national seed (likely Texas or Maimi). That presumes that an LSU team after a continued slump would even make the field. The SEC has a chance to send 7 or more teams this year, and we can ill afford to fall further in the pecking order, lest the NCAA decides to include more at-larges not in the SEC.