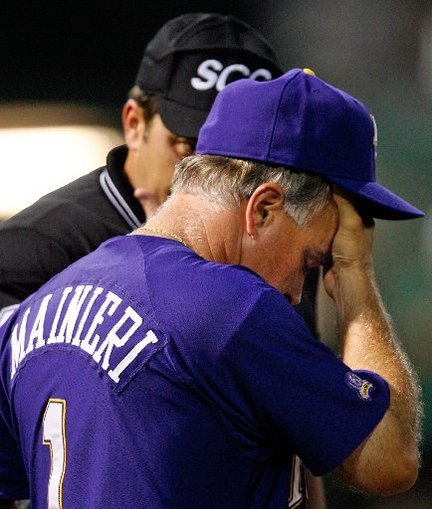 Image via the Times-Pic, who's Tulane section apparently doubles as a message board for the Greenies out there, all 5 of 'em

Just some stats about Tuesday night: Worst loss to Tulane since a 13-3 game in '01. Losing 13 of 15 is the worst skid since '78. Worst offensive production since the 2nd Texas game last summer.

This really could be the last weekend of LSU baseball this year. If you are in BR, I do hope you take in a game. More on the series against Moo U later today.

Or just head up the River Road a bit and catch some championship-caliber softball. Girouard enters the weekend with her most complete bullpen ever as Softball regional play at Tiger Park begins Friday night against McNeese. They will then face the winner/loser of TxA&M/USL on Saturday and play Sunday for the right to head to UCLA. It's double elimination just like baseball. LSUSports.net is running some great previews of all the teams in our regional.

Megan McChrystal is in 10th place and climbing through the halfway point of the NCAA women's golf championships. She'll start play sometime after 11am and LSUSports.net has links to free live streaming of the final 3 holes of the round. The Men's squad begins NCAA regional play this morning as a 5-seed in the Central Regional at Notre Dame.