Share All sharing options for: Miss. St. Recap-The Road Ahead 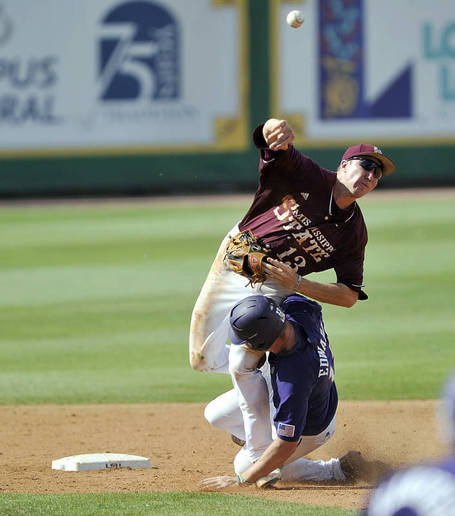 Alex Edward in a TOTALLY LEGAL slide into 2nd base. Incidentally, this pic is available for sale in the foyer...

All LSU had to do this weekend was win and we were in. We got 2 wins and, thanks to UK's epic collapse, it was enough to get us into Hoover for a chance to defend our Tourney Championship crown. Or at least get a regional invite. It was some of the best baseball we've played in a month, but that's not saying much as more work is still needed if this team is going to be playing past the 1st weekend of June.

Thursday was a good game that we should have run away with.

Hitting was great on Friday, especially the epic 3rd (entire lineup reached base) and 5th (3 homers, 6 runs) innings. Ross was good through 7, but if we hadn't just gotten 11 runs, he probably would have been pulled after the 2 home runs in the 4th. The offense was stymied late, but it was against MSU's best closer and we probably weren't really trying at that point on the way to a 17-3 win.

Saturday felt kinda lazy. We left alot of men on base, including getting 1 run out of a bases-loaded, no-out 8th inning. Matulis had to be pulled early and a combination of Alsup, Bourgeois, Bertuccini, and Ranaudo kept it close, but the runs never came. MSU got their only division win of the year against us, 1-2.

If we are talking honestly about our prospects in the SEC tourney, it doesn't look good. As the 8 seed, this should be expected. Florida has only gotten better since we last saw them, now riding high on the SEC regular season title. We would probably enter the losers bracket (likely against Arky) and then face the daunting uphill climb of the double-elimination tournament. It'll be a tough, probably miserable week.

But who cares about Hoover.

Historically, LSU doesn't really mind not winning the SEC tourney because our focus is on getting to Omaha. With that in mind, our focus this week should not be on winning the tourney (though you will certainly hear that from CPM and the players) but instead on using our last opportunities to do something, anything that will get our pitching back. After this weekend it remains the large glaring weakness on the team and even two games may not be enough to fix it. Ranaudo's ok performances in short relief on Thursday and Saturday point to Mainieri wanting to use him in the first tourney game. He and Ross are the only two I would say for certain will get a start this week. Giving Ranaudo a chance at revenge against UF and him succeeding would do wonders not only for this team's confidence, but a huge boost to our regional outlook.

But what to do with Matty Ott? If anything, he seems to have gotten worse lately, and judging by what we saw Friday night, CPM is at the breaking point with him. At this point, I can only see him being brought in for some easy mop-up duty in a game where we are far ahead. I don't think CPM would bring him in in a close situation again, especially if Bertuccini or one of the other middle relievers is still throwing well. Which is a problem, because we need him to get it together if we hope to get out of a regional next week.

Time is short for this team. But as Hawthorne pointed out on numerous occasions this weekend (when he wasn't in the middle of an Ocshner ad) stranger things have happened in the college baseball postseason. We just need to get hot.