Baseball v Florida starts @4:30 or thereabouts. The game will be carried locally on Cox Sports. Ranaudo will get the nod today. GameThread coming up shortly. An interview with Blake Dean after the break.

The ALL-SEC baseball teams were announced yesterday. Gibbs made the 1st team and All-Defensive team while Nola and Gaudet made the 2nd team. The league also made it known that they are shopping bids for a new SEC Tournament host site starting in 2012. The bad news is that the 3 front runners are Duluth, GA., Memphis, and *ugh* Hoover.

Because you wont hear it anywhere else (well, except in the Advoc), LSU-Eunice has advanced to the NJCAA World Series in Enid, Okla. If you are looking for future transfer material, remember the names Raph Rhymes, Eldred Barnett, and Gabriel Thibodeaux.

A recent govt report confirms that at least as of late 2005, LSU football still carries the cachet we believe it does with local bureaucrats. To be honest though, a trip to the Peach Bowl in '05 from a friend would probably be the high point of that year for any St. Charles resident, let alone an MMS employee. 2005 was kinda rough on all River Parish residents if I recall...

A small congratulations to all the Arky fans today on the selection of a new live hog as the next Tusk. Give'm a year or 2 to grow and he'll make for some good eatin. Even for the opposition, Live animal mascots are part of what makes college sports awesome.

And that 2-day country music festival/LSU Heath Services experiment in Heat Exhaustion triage in Tiger Stadium is this weekend, and Death Valley is getting decorated for the occasion. Early reports suggest ticket sales around 80-90,000, which would be quite impressive for it's first year. I wonder how the stage setup looks.... 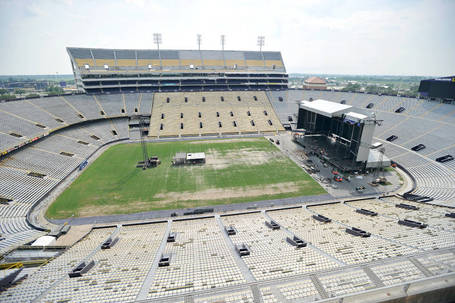 It continues to amaze me that TS appears to be the only place in South LA where grass doesn't grow a foot a week.