So now, inexplicably, we have three solid starters, 1 1/2 closers (nearly there, Ott) and an offense where everyone is hitting their stride at the same time. We've gone from hopefully making the tourney to a far outside shot of hosting (it isn't really likely, but we will know soon enough) in just over 7 days. The team is playing with intensity and CPM hasn't looked this happy in months. Like a Bertman squad of old, this team is playing for summer, not spring. The goal of every season is Omaha, and winning it all in Hoover is going to make that road immensely easier.

Enough cannot be said about how great Alsup was yesterday. When that sinker of his is on, it's just nasty and Ole Miss almost never figured it out. And even when they did, some outstanding defensive scouting was sitting there waiting for it. I cannot wait to see him completely shutdown a team on a Saturday or Sunday this June.

It's a good thing Ranaudo, Ross, and Alsup all had long outings, because we are gonna need all the arms we can find. I won't doubt the man before he gets to the mound, but to hope that Bradshaw's outing will be as dominating as the rest is almost asking too much. With the title on the line CPM won't be messing around, expect the bullpen to be active early and often. Realistically everyone except Ross and Alsup could make an appearance if things go south. Ranaudo riding to the rescue for short-work late in a close game is highly possible.

What a coincidence that we face Bama. That last weekend series with them has become the pivot point on both team's seasons. For them, it marked the beginning of their climb out of the West cellar, leading to some epic complete game performances down the stretch from Kilcrease, Nelson, and Morgan (none of whom is pitching today). For us, Ott's 7-inning Sunday, while certain to go down as legendary when this season is behind us, marked the last time we all had full confidence in the pitching staff.

In the final Tournament Championship game, Bama is 7-0, 3-0 against LSU alone. Bama owns this tournament. Make no mistake, we are the visiting team tomorrow. The stands will be filled to capacity with bandwagon Gumps, their bangs pulled up in their flat-billed houndstooth baseball caps and wearing their just-bought-from-a-street-vendor BCS Championship t-shirts (i would pretend to be making a mocking stereotype if I hadn't seen this exact outfit on 5 SEPARATE PEOPLE so far on TV this weekend) They will be loud. They will be obnoxious. They will be hostile.

We will ignore all of that. Because we are the best damn program in college baseball. So what if The Road to Omaha doesn't run through Baton Rouge this year. The rest of the college baseball world has whined and moaned for more than a decade about how "unfair" it is that we so often get the "easy" path of home regionals. Bully on that! They shall rue the day they "invited" us to "their" regionals. Their towns will quake in fear at the traveling carnival of LSU fans; a fleet of RV's, 20ft. charcoal grills and refrigerated meat trucks, all gassed up and parked in a field between Nicholson Dr. and The River, just waiting for a destination and a green light. We shall be a Mongol horde, criss-crossing the country, laying waste to all teams and cities that dare stand in our path. Our trail of destruction begins HERE! Bring me the head of Mitch Gaspard on a pike! Preferably still wearing his Braves cap which, I'm told, "has swagger" (warning TD.com link)

TV: ESPN2, probably called by the Omaha crew....wait a minute....no! Get Back Kyle Peterson! They must have left him in here overnight! IT wants to feed! NOOOOOOOOOOOOOOOOOO 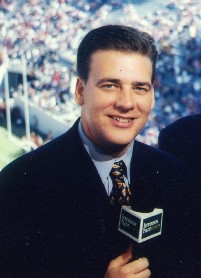 Weather: You could not have asked for a worse forecast. Thunderstorms all day, not even easing up till after 7pm. Clear your afternoon and evening folks, because the league is going to get it's nine innings if Mike Slive has to go down there and stand behind the plate himself.