Hope Can Drive a Man Insane: A Prospectus on the 2010 LSU Offense

Share All sharing options for: Hope Can Drive a Man Insane: A Prospectus on the 2010 LSU Offense

In the wake of LSU's first seven-game losing streak in baseball in...[too lazy to look up] well, a LONG time, let's move on to a topic on which we all have a much sunnier disposition...football!

Disclaimer: This post, I have to admit, has a lot of speculation. Some of that speculation is based on some observations from the Spring Game. That, of course, should be taken with a grain of salt. But this post over at Smart Football a few weeks ago got the gears a-turnin', so bear with me. Call it educated guesswork.

LSU's offense has been the subject of quite a bit of...shall we say hand-wringing in the last few months - featuring more than one battle royal between Poseur and myself. Nobody saw the 2009 struggles coming, and in the rush to assign the blame (and as well all know, the adult thing to do when things go wrong is find somebody to blame), there seemed to be a bit of confusion. Les Miles won't let Gary Crowton call plays! Miles is letting Crowton call too many plays! Crowton can't gameplan! The playcalling is too conservative (is the opposite of conservative liberal in this instance? I've always wondered)! Jordan Jefferson has no accuracy/pocket presence/ability to make decisions/[insert quarterback criticism cliché here]? The offensive line is too small! The offensive line is out of shape! Greg Studrawa is incompetent! Greg Studrawa is fat! Charles Scott is out of shape! Rueben Randle/Russell Shepard/[insert freshman] needs to be playing more! There, I think that covers the gamut.

But the truth, as it usually is in all things, is kind of in the middle of all of that. Everything was wrong (except the part about Coach Stud being fat -I'm certainly not in the position to comment on anybody's weight). The offense was this kind of amorphous blob of suck. In fact, you could kind of say that LSU didn't really have an offense, at least in the conceptual sense.

As Chris Brown put it back in January of 2008, a team's offense is the core group of plays that define it. Think the zone read for Florida (or the draw play back when Steve Spurrier was running things in Gainesville), the triple-option for Georgia Tech, the stretch play for the Indianapolis Colts, or, in the historical sense, the quick slant of the San Francisco 49ers and the power-O of the Washington Redskins.

In 2009, there was no real way to define LSU's attack. It wasn't pro-style. It wasn't spread or spread-option. And regardless of whatever changes come from a personnel standpoint in 2010, if there's going to be improvement, this amorphous blob of suck has to grow a backbone.

Now, you're probably sitting at home thinking "thanks for telling us what we already know Billy! So how's it going to change?" Well, that's where Billy Gonzales comes in.

The Tigers' new receiving coach was brought in with "passing game coordinator" as part of his title - typically just a title used to justify giving an assistant coach a few extra figures in his pay check. But, if my theories are correct, he may wind up doing more than just helping revamp things through the air. Gonzales may very well be helping LSU find an identity on the ground as well.

Now, watch these cut ups of the Oregon offense and the Florida running game.

Schematically, there are some small similarities, mostly in alignment. Watch for the way the backs line up in some of the shotgun plays - particularly off of the back of the quarterback's hip. It's a positioning common in both Urban Meyer's offense and the Oregon spread attack as well, which has certainly gone to the next level under Chip Kelly but has its roots in Crowton's style. 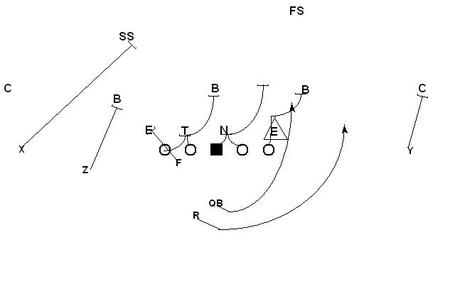 The reason for the positioning is simple enough. By standing in that trail position with the quarterback in a six-yard shotgun instead of the usual seven, the running back's first steps on a run play are towards the line of scrimmage. It obviously helps create a more downhill-style running attack similar to the pistol formation - and combines that element of the pistol while still allowing for the spacing to run the customary zone-read play.

What exactly does this mean? It could (and I can't emphasize the "could" part of this enough) mean that Gonzales may be emphasizing the zone-read/veer dive (see the UF run cut-ups) as the constraint plays (read: backbone) that LSU's running game needs.

A constraint play, as Chris tells you in the prerequisite post, is designed to keep defenses honoring what you want them to honor. Have an athletic slot receiver that you like to get the ball in via screens or jet sweeps (such as Percy Harvin or Russell Shepard? Well, as we see in several of the plays in those videos, the zone-read or dive can give you the constraint needed to keep that player in favorable match-ups. Defensive ends or outside linebackers have to honor the interior run or the quarterback keep before they can defend anything else, creating extra reaction time that favors the offense.

Which brings us to the next person that could play a key role in an offensive re-emergence: Shepard. As much as Florida's offense was run through Tim Tebow's skill set, it wasn't the same efficient, big-play machine in 2009 without Harvin (as evident by an 8-point drop in points per game). There were other Gators who could run the ball well, and others who could catch it, but none that did both with as well as Harvin.

You could argue Shepard has already shown a similar importance. In 2009 LSU's total offensive yardage rose by 20 yards in the five games in which Shepard touched the ball five or more times. The Tigers scored their highest point total versus SEC competition in regulation against Auburn with help from six touches by Shepard. Nobody's ever denied that the guy is explosive as a runner. Even watching the Spring Game, for all the offense's struggles, the drives that featured a lot of involvement from Shepard went much smoother, whether he touched the ball or not.

This shift in offensive strategy, coupled with a more effective offensive line, could cover for an average passing attack very easily. It might not be pretty, and it might still be downright frustrating at times (see the 2009 UF attack), but effective nonetheless. The jury's still out as to whether Stevan Ridley or Michael Ford can provide the explosion of a Jeff Demps or a Chris Rainey, but they are bowling-ball types who, at the very least, will reach an effective performance level and provide a slightly different look from Charles Scott and Keiland Williams.

Additionally, the read/dive combo can be played off of in multiple ways - with play-action, screens and other quick passes that could allow for a more managed passing attack. Jordan Jefferson may never be the dynamic quarterback everybody wants, but he can operate efficiently in a well-managed attack. Statistically, the only substantial difference between Jefferson and Matt Flynn (as detailed here) was that one had double the production from his rushing attack - and with a full yard more per carry. Another player who could be key in this situation is Deangelo Peterson, who could fit this style perfectly as an H-back/motion tight end who can pull around for the occasional kick-out block as well as release out into the passing game, similar to Aaron Hernandez last year for the Gators.

Now, there are certainly holes in this theory. Neither Jefferson nor Jarrett Lee are option quarterbacks. And the option (be it spread, I-formation, flexbone, what have you) is not the kind of play that a quarterback tends to just pick up without a lot of practice. Making the dive, keep or pitch reads (or the occasional pass read) take a lot of repetition. But, if these plays do really become bedrock plays of the offense, you would expect those practice reps to increase. And what makes the option such a special play is that for most defenses, it only takes one or two quarterback keepers to force defenses to honor it - creating more room for the running backs. I'm also assuming that the offensive line takes a leap forward as well -- an idea that shows promise, but by no means is a given.

If I'm right, Gonzales (and to a lesser extent, running backs coach Frank Wilson) give LSU a little clarity in its offensive approach for this coming season. Or, maybe all of this is just be another Spring Game mirage. But either way, it's hope.