So, against anyone's predictions or hopes, LSU walks away with the GREAT MARBLE OBELISK of SEC domination after the best week of baseball all season. We knew the championship game against Bama would be tough and they made us work for the title. Ignoring the intangibles (home field advantage, undefeated in champ games, the dizzying effect of a houndstooth pattern) Bama came in to the tourney very hot and were just as impressive in making their way through the tourney. It was one of the greatest games of college baseball played all year with rain delays and multiple momentum shifts.

Bradshaw had a fine outing giving up only 1 ER and 6 hits through 6 innings with 5Ks. Right up until the end, that nasty curve of his was perfect. He was helped by Tiger batting who struck hard early on Bama's Wolfe, who only lasted part of 3 and gave up 3 runs including a solo shot by Mahtook that would be good in any park. A good thing too, as we were quickly stymied by Hawley, Nelson and Smith until the very last minute. For our own relief, we played the lefty-righty game with Cotton for just 1 pitch then went with Bertuccini, who got out of a serious jam with a miracle DP by katz then, after the 1st rain delay, gave up the tying run in the 8th. Bertuccini never looked good and though part of me wants to say he wasn't fully ready after his relief appearance on Wednesday, 4 days should be enough for a relief pitcher.

Another long rain delay in the middle of the 9th left us only with the knowledge that Ott was warming. Given the recent momentum swing towards Bama and our sudden shutdown at the plate, I feared another disastrous outing for The Chalmation Sensation would doom our hopes at pulling off the upset. Maybe because he felt the same or maybe because he was asked, CPM sent Ranaudo out to keep us alive and send it to extra innings. He nearly lost it in the 10th but he held it together just long enough for Hanover to bat Fury home in the 11th for a one run lead. Ranaudo came back in for the bottom frame, probably pumped up from the offense finally going ahead, and was dominate again with 2 mean fastball K's to seal the win.

It is the 1st 3-peat in the current format of the SEC tourney (we have another 3-peat from back when they used the divisional format in the 90's) and it is the first time Bama has ever lost the baseball championship final. As evidenced by the all-tournament team, almost every player had their best week in months and we can only hope to ride this great wave of momentum all the way to Omaha.

For the future, there are a few notes of concern. In the dog pile we nearly had a Mestepey situation, as Ranaudo's left hand got stepped on a few times. Gotta be more careful out there fellas. (Reports say he's fine btw). And even in pain, try not to cuss on national tv AR. 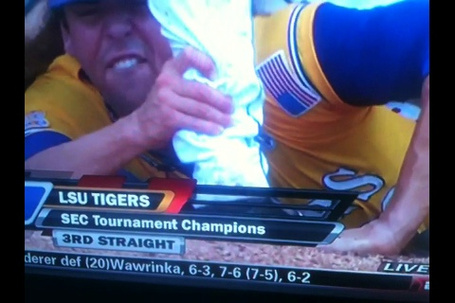 Now for the other, more serious issues. While the rest of the team has the bats alive, Landry has gone dead cold. His speed in the outfield and seniority will prevent CPM from pulling him, but unless he can get it going again expect him to be all over the place in the batting orders. As long as everyone else stays this hot, we can bat around him.

The biggest issue of the weekend, the one that nearly cost us the Championship, is relief. Bertuccini still gives up too many runs "warming up" out on the mound. He settles in fine, but the first few batters he faces are always brutal. Ott may finally be improving, but he's still not at his best. I hope there is a situation this upcoming weekend where we can send him in for some garbage time up big on a weak team. He needs a few cupcakes to get his confidence up for the final stretch. While it will make for the stuff of legend, the simple fact is that Ranaudo should not have had to go out there for those final innings, and it only reinforced the fact that our bullpen is a weakness and that is a scary problem to have going into June. 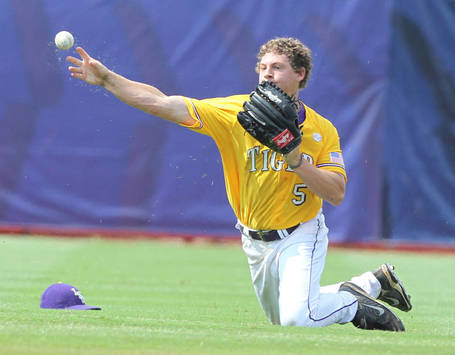 There are stars on this team to be sure. One look at the all-tournament team and you know there are plenty of options when it comes to picking an MVP. Certainly Nola is deserving, and the unbelievably good starts from Ross, Alsup, and Bradshaw will be highlights of this season. Not to mention AR doing everything in his power to make sure there is an Anthony Ranaudo Day a few decades from now. But those should be expected. Before the slump, these guys were already making names for themselves and their performances in the tourney, while great, are at the level we expect from a Championship-caliber baseball team.

Mason Katz, however, did the unexpected. Coming into the tourney he had only 2 starts and a few lackluster appearances in blowouts or midweek throwaways. With Watkins still not quite ready, CPM started him on Wednesday and he (along with another rising freshman star in Alex Edward) proceeded to have a great tournament hitting 6-16 for 4 runs and 3 RBIS. His play on defense in particular should be commended, especially the amazing catch and toss Double Play that got us out of a huge jam in the 7th on Sunday. While the others will get their praises from the papers and the big media, we chose to honor the Freshman who came up big at the most important time of the year. He should be a great Tiger for years to come.

The Mongol Horde is packed and ready, just waiting for the signal fire on top of Alex Box to be lit. At this point we could go anywhere. Your guess is as good as throwing a dart on the map. As long as it's not UCLA or UCONN we will be just fine. Seeding will be announced on one of the ESPN's around noon and we'll be sure to give you an update once the full bracket is out.