This is the 1st in a 4-part series previewing the Los Angeles Regional which begins Friday. 1st up, the host stadium.

Built in 1981 and paid for almost entirely thanks to a single donation by California development tycoon and Robinson teammate Hoyt Pardee, Jackie Robinson Stadium is of course named after the former UCLA 4-sport letter winner who played there (at UCLA) from 39' to 41' and would go on to do so much for both baseball and pro sports with the Brooklyn Dodgers. For those traveling, word is there is a very nice bronze statue of of the stadium's namesake that should be worth a look.

If the picture up above didn't clue you in, let me spell it out. This is a very small park, with official capacity of just 1,250. Judging by what I can tell from pictures, even with the meager bleachers and grass berms down the lines, capacity is maybe 2-2.2K at best (officially, the park's record is 2,500 for the stadium's opening game, an exhibition between UCLA and the LA Dodgers. Number seems kinda fishy, don't it?) It will be far and away the smallest crowd to see LSU this year. Even during the bad stretch, Alex Box still drew over 5K actual. Even that weird home-away game with Natchitoches up at Shreveport drew over 4K. For those reasons, ESPN is going with the CS Fullerton Regional across town.

(Note: UCLA's own live, online streaming service won't be available either after they reportedly balked at the right's fees. You stay classy, Bruins.)

UPDATE: We learned midday on Tuesday that Cox Sports TV will cover the entire Regional LIVE. Thanks Lyn! 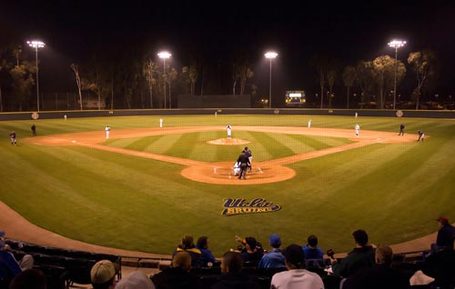 Clearly, you made the right decision NCAA /facepalm

And It's not much better for travelers. There is a reason the Bruins play football in the Rose Bowl. Leave the RV's at home and fly, because their ain't nowhere to put'em even close to the stadium. Seriously, I doubt the parking lot can hold cars for 2K. Fly into Santa Monica and try your best for a hotel room and taxis. Jackie Robinson Stadium is right off the 405 but on the opposite side from the University and the massive LA Cemetery. Boaters (I know you are out there) try for portage at Marina Del Ray. 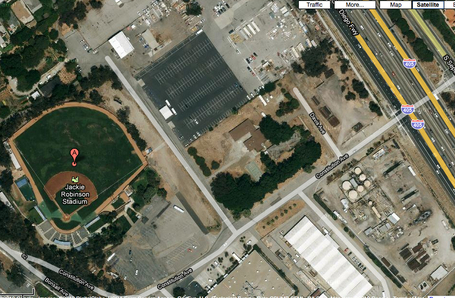 There is no room on these narrow paths for our engines of war! We must approach on horseback and overwhelm them at the gates!

Note: Sat photo appears to be dated from the last renovations in 08, most of the dirt areas are grass now, and that off-color green area near the plate is gone now.

I don't mean to be so harsh on the Bruins, who clearly deserve the honor of hosting, but UCLA has been a projected host for a long time this year. With enough advance notice, surely an alternate arrangement could be made. Find a nearby minor league park or something.

As for the park itself, it's a standard grass and dirt affair which, given LA's penchant for excellent weather, is probably a nice and cozy little park. Those trees give alot of shade down the left field line, or so I've heard. No nonsense with FieldTurf or infield dirt paths like we've dealt with at other parks this year. One thing the park has going for it are some nice, big, fenced off bullpens (artificial surface) down the left and right lines, right past the dugouts. Expect Hawthorne to complain endlessly about how he cant tell who's warming. Their isn't alot of foul room down the lines but there is alot of space behind the plate. A nice, standard curve to the outfield, with what looks to be 8 or 7ft high vinyl covered padding all the way around. There is a small scoreboard out of play in right center and a screen batters eye in straight away center.

Dimensions are on the small side: 330 down the lines, 370 to the power alleys and 395 feet to straight-away center. If our bats were hot in the barn that is Hoover Muni. last week, I can only imagine how well things will go here. Warning Track Power Indeed. 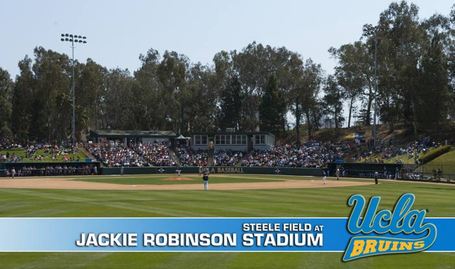 Not shown: Further bleachers down the left and right lines.

Info from the Jackie Robinson Stadium Page and Wikipedia article, this Pac-10 release about recent renovations, and various bits of the UCLA Media Guide (broken up into sections on the left side of the page).