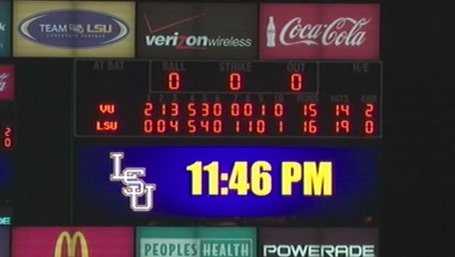 This game started at 7pm.

It was a long weekend that leaves us right where we started with the continuation to the 2nd worst 3-week period in LSU baseball history.

Friday was just insane. The wind was blowing out but numerous radio comments point to a very concentrated strike zone by the ump forcing both teams to throw more over the plate than they wanted to. Whatever the reason, it was not a good night for either battery. Ranaudo never found his groove and looked uncomfortable on the mound as he was pulled in the 3rd after giving up 5 runs. LSU's hitting finally awoke in the 3rd, but horrific outings from Mormann, Cotton, and Bradshaw just kept making the hole deeper. Finally, Bertuccini entered in the 6th and was able to hold the Dores back while we scrapped to take the lead going into the 9th. Even though Bertuccini was doing all-right, with the top of Vandy's lineup due up, including league-leading hitter Gomez, it was clearly the situation that Ott was meant for. After handling the 1st two batters, The Iceman gave Gomez his first career HR. Ott would get us out with no more damage thankfully and in the bottom of the 9th.....

I'm not actually sure what happened in the rest of the game. As has been documented, at this point in the radio-only game 98.1 fm went all static throughout the state and I spent the next 20 minutes trying to find anyway of catching the game. Just in time I got LSU's facebook notice about the opening of the geaux zone to all and tuned in to see Gibbs hit one into the left corner and Dean sprint home from 1st. I was happy and pissed and exhausted all at the same time. It felt like the magic was finally back, like the last two weeks were merely a bad footnote, to be filed away where Hanagriff could find it years later if such misfortune should ever happen again.

Then came Saturday. CPM had yet again decided to wait on picking his starters for the weekend. Rittiner, who hadn't seen a weekend start since Kansas, got the nod and despite the score, was actually pretty good. In fact, he lasted through till the 7th and I'd say 2 or 3 of his 5 allowed runs can be blamed on some bad fielding errors. Dozar at 3rd in particular had so many miscues that, combined with his lack of production at the plate, he was pulled in the 6th and rode the bench for the rest of the weekend. Our continued troubles at 3rd this year is setting up for an awkward situation once Watkins is ready to go (as early as the Kentucky series by his own admission) thanks to the the hot bat of FR Alex Edward who was one of the bright stars this weekend. Alsup in relief only gave up one more, but thanks to a regular strike zone, Vandy's Taylor Hill nearly threw a shutout with 8 Ks. Hill gave up 2 runs with 2 out in the bottom of the 9th before putting LSU away. 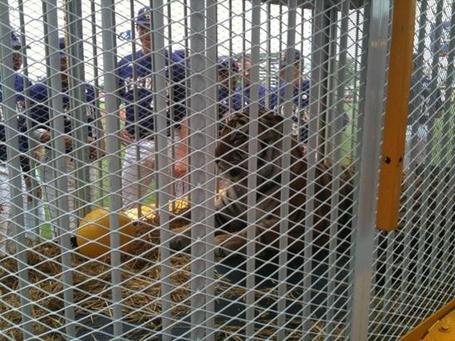 Sunday's rubber match was a fine game of baseball marred by an idiot. For no particular reason, Mike VI was brought out to the stadium, something I don't think has ever happened in baseball (in fact, with the exception of the introduction of baby Mike V at a Shaq-era basketball game, it's the only time i can remember Mike being at a non-football game) Ross got the nod and was great, giving up just 2 to Vandy. Our hitting slumped again but Alex Edward, clearly aiming for a role beyond subbing for Watkins, twice hit 2-out RBI singles to keep us tied. Ross was pulled in the 6th after some trouble, and short appearances by LaSuzzo and Bertuccini bridged the gap to Ott in the 7th. In the 8th, Ott was ahead with 2 outs and 1 on when he threw a high popper that drifted foul to the right. Dean sprinted and dove nearly head first into the stands to grab it for a miraculous Top 10 catch. He would have had it too, if not for this fool who ended up with his hands in Dean's glove. 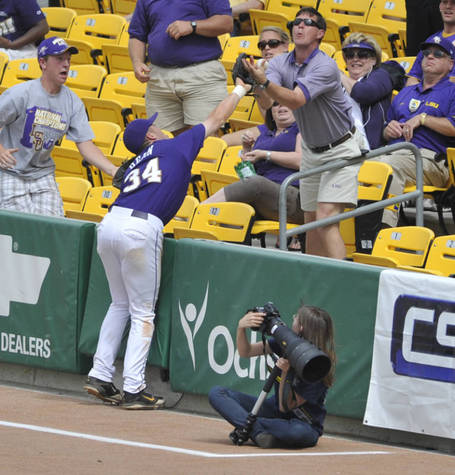 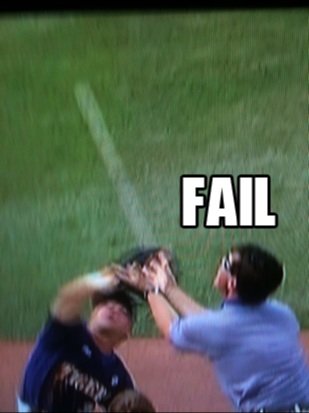 I'm not gonna harp on this too much, but if this idiot had looked down for one second to see Dean charging, he would have known to get out of the way. That white streak in the 2nd pic is the ball literally falling into Dean's glove where this man's hands are. He's no Bartman, but he certainly does not deserve those seats (Wanna repent, dummy? Give the rest of your season tickets to somebody sitting in the outfield bleachers and never, EVER run down the aisle for a foul ball again. What are you, 10?)

This bit of bad luck was all Vandy needed. They put another on and then scored a 2 RBI single. Ott reined it in, but in this tight game it was a fatal blow. Still down 2 in the bottom of the 9th, LSU managed to get two on and then close the gap with an RBI single. Watkins had entered the game as a pinch runner and had a nice lead at 2nd, ready to score on anything that made it past the dirt. In this crucial at bat, the story almost writes itself. Mahtook, hitless all weekend, hits a walk off homer, LSU ends their skid, and the team enjoys some Maui Smoothies with their Moms and Ronnie Rantz (Sunday's CST broadcast was a little surreal at times). Instead, Mahtook strikes out and Nola hits a soft grounder to 3rd that is easily relayed. Game Over, Vandy takes the series, no smoothies.

So what do we do now? Things shutdown for finals this week before a mad sprint to the end with two SEC series and the first trip to Turchin Stadium in quite a long time. Kentucky, after losing Friday and giving SCar the 1st lock for Hoover, promptly took the next two for a series win. This is a huge upset considering the only reason Kentucky isn't dead last in the east is that they aren't UGA. I expect this upset to be attributed to SCar looking ahead to a murderous 2 weeks of @ Arky and hosting Florida. Tulane will be Tulane, and we will see if their voodoo-cursed infield artificial FieldTurf dirt is as completely insane and an affront to all that is baseball as it sounds. The final weekend sees the Starkville-ites and their trucked-in cowbells come to town for the traditional season ender. Anything less than a sweep will not only be unacceptable but hugely embarrassing, and I do mean that statistically. MSU has not won a single SEC-west game this year and would be tied for dead-last in the league had not Mother Nature intervened in Nashville last weekend and canceled two games.

At this point we have severely damaged our post-season outlook, nearly beyond repair. Regional projections this morning will likely put us out of hosting and though sweeping the remaining games is well within our ability, they will be of little help to our resume for the selection committee. Hoover is now where our season lies. We have two very cramped weeks of work to figure out what is wrong with Ranaudo, what to do with LF/3B and a returning Watkins, and work on the fundamentals that stop errors from happening. I believe that Mainieri can do this. But I am nervous...