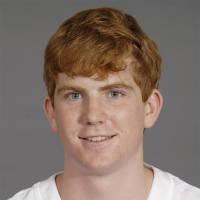 First of all, I must repeat that I'm doing these profiles in alphabetical order by last name, and that's why you'll have to wait a while before Storm Warren is posted.

Contrary to popular belief, Eddie Ludwig was not brought in to seal the deal for Derenbecker.  It was Eddie who finally stepped up as LSU's fourth-best during the final three games of last season.  Too late to save the season, of course, but enough to promise great things to come.

Eddie had a really up-and-down season.  Eddie looked convincing against UConn, which led me to post prematurely that Eddie was destined to become a fan favorite as a high-energy big man.  But Eddie failed to hold on to that fourth-man job.  His lacked the strength to be a force in the paint, and he was unable to transform the absolutely gorgeous touch he showed while shooting free-throws into a productive offensive game.

But the last three games, Eddie really turned it on.  He got 9 points and 6 rebounds against Ole Miss.  He was a nightmare for Georgia, getting four steals that really helped us win the game.  He finished the season against Tennessee in the SEC championships by playing 31 minutes and getting 8 points and 5 rebounds.  At the end of the season, coaches gave Eddie the Coaches' Award, and his teammates named him 'Most Improved'.

Though it's safe to say Storm Warren is LSU's starting 4, do remember that even Storm was held to 25 minutes per game last year, so Eddie will still have plenty of room for minutes.

There are certainly things he needs to work on, but if he improves in drawing fouls, his splendid free-throw shooting (he was 26-30 from the line last year) will give LSU a lot of easy points.  He'll need to improve his strength, too.

But Eddie has some of the finest ball-handling of any of LSU's big men, with an assist-turnover ratio of 19-19 (which is really good for a big man).  He also has that soft shooting touch that is very rare.  If he can turn those things into a great all-around game, there's no guessing how good he can be.  Expect 15-20 minutes per game from Ed the Red.

Post your comments below.  You know you want to.